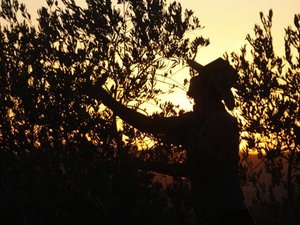 Jewish settlers clashed with Palestinian farmers on Sunday as they tried to pick olives from land owned by the family of two men convicted of killing a young settler family in March.

At least three Palestinians were injured when dozens of settlers armed with sticks and stones attacked the group of about 50 workers as they tried to harvest the olives from land which belongs to the Awwad family from the nearby village of Awarta, an Agence France Presse correspondent reported.

The olive groves lie very close to the edge of the Itamar settlement where a young couple was stabbed to death along with three of their young children earlier this year, in an attack by two young Palestinian men from the Awwad family in Awarta.

Israeli troops arrived at the scene and broke up the clashes, and were trying to protect the farmers, although the settlers remained close by, throwing stones and shouting: "Death to the Awwad family."

Settler officials told AFP they were protesting over the fact that the Palestinians were working in land belonging to the Awwad family.

Hakim Awwad, 18, confessed to the murders before an Israeli military court in September and was sentenced to five consecutive life sentences, while his 19-year-old cousin Amjad Awwad admitted his involvement on October 4. He has not yet been sentenced.

Palestinian sources confirmed the land belongs to the Awwad family, part of which lies within the boundaries of the settlement.

Benny Katsover, head of the committee representing settlers in the northern West Bank, said the army had allowed the Palestinians to pick olives from a grove next to the settlement's boundary which belonged to the Awwad family.

"It is an absolute scandal to allow these Palestinians to come so close to Itamar, above all when we are talking about the family of those murderers who killed the Fogel family," he told AFP.

"Once again, the army is putting the lives of Itamar residents in danger," he said.

Twelve-year-old Tamar Fogel, who lost her parents, two younger brothers aged 11 and 4, and her three-month-old baby sister, in the grisly stabbing attack, was one of those who went out to confront the farmers, he said.

David Haivri, a spokesman for settlers in the northern West Bank area, accused the farmers of attacking the demonstrators.

"The Palestinians threw stones at the demonstrators and shouted death threats at them, saying: 'We'll do the same to you as to the Fogels'," he said in a statement emailed to AFP.

An Israeli army spokeswoman confirmed that one Palestinian had been injured in clashes which erupted with settlers near Itamar.

"It's the start of the olive picking season so there were clashes," she said. "We dispersed the clashes, and now the Palestinians are being allowed to pick olives with the force securing them."

She said one Palestinian was hurt by a rock and treated at the scene by an army medic.