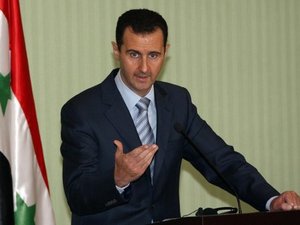 "Syria is taking steps focused on two main fronts -- political reform and the dismantling of armed groups," who seek to destabilize the country, Assad told the visiting foreign ministers of Cuba and Venezuela.

Assad told the ministers that "the Syrian people had welcomed the reforms but that foreign attacks intensified just as the situation in the country began to make progress."

The Syrian president accused Western powers of having "little interest in reform," seeking instead to "push Syria to pay the price for its stances against foreign schemes hatched outside the region."

"Despite everything, a process of reform is underway," he assured them, stressing that Syria's decisions on this matter were "sovereign and not related to foreign instructions."

The foreign ministers of Venezuela and Cuba were at the helm of a delegation of leftist Latin American countries -- that also include Ecuador, Nicaragua and Bolivia -- which travelled to Syria to "show support."

The delegates also denounced the "political and media campaign being waged against Syria," SANA said.

The eight-member ALBA bloc's talks aim to "reject invasion and political destabilization attempts by the United States and its allies," Venezuelan Foreign Minister Nicolas Maduro said prior to the visit.

"We reject all forms of interventionism that the empire is trying to apply as it did in Libya for a violent process of regime change," he added.

Washington has renewed its calls for Assad to step down immediately amid escalating violence against anti-regime protesters that has left nearly 3,000 people dead.

There should be reform to dismantle the current regime.....

hehehehhe..... he is seeking reforms!!!!! The basics of reform are democracy and transparency, two things which are not in your vocabulary. Your regime is not based on popular representation so how can u talk of reform. A Butcher and a criminal cannot speak of reform.

When we see the Syrian army members walking in the middle of the street without any cover and shooting randomly at protesters and homes we cannot but wonder where are the armed gangs?
There might be some infiltrators who exploit the situation but does this justify the cruelties and the killings that is perpetrated by the regime's thugs?

assaad you rae on your way out, the wife has disappeared and soon you will be six feet under ground! just go and go to hell you small time killer

what you call infiltraitors are just the families of those dismembered by syrian army regime.
if we were in there shoes, I have no doubt that by now it would have been a complete civil war.
the more atrocities this regime does, the more it is pushing th syrian people to shift towards an armed conflict.

The ONLY Armed Gangs are yours, they are called The "Shabbiha".
Are you taking us for morons. Do you really think any reasonable person believes your LIES about Armed Gangs. Tell what I have the Brooklyn Bridge to sell you.

You are a liar and cannot be trusted.
Proof (i.e. Citizens taken from their homes for 50 yrs without any court orders and returned either killed or useless to live from the animals beatings-Moukhabrat)

The Syrian government does not have 130 billions in oil money to bribe its people like the KSA. The US keeps on praising the reforms in KSA, because it is an American puppet regime (even though it needs to reform 10 times more than Syria).

Anyway, the Syrian government which is strong and has a powerful base must TRULY reform and unite with the Secular opposition. The US and the KSA want to turn Syria into another Afghanistan (or Iraq).

The sunni sectarian leaders in Lebanon are becoming weaker and more fragmented. The Wealthy Mini Hariri has been a big failure, and the Salafists in Lebanon are getting stronger. If I was a sectarian M14 Sunni or Christian, I would not be rooting for a Salafite take over in any area of Syria.

The Syrian government does not have 130 billions in oil money to bribe its people like the KSA. The KSA is a puppet of the USA and it needs more than 10 times more reforming than Syria.

Anyway, the Syrian government, which has a powerful base must TRULY reform and unite with the Secular opposition. The US and the KSA wants Syria to become another Afghanistan (or Iraq).

3000 terrorists killed is not enough Mr President , you need to kill them all , about 30.000 or 300.000 to clean Syria and Lebanon from terrorism and salafis fundamentalists . The ones that will escape will go back to their country where they came from and belong ; KSA .

Assad you are in panic mode and have no clue who to resolve the current situation. I am sure you are using the same tactics you used in Lebanon (torturing people).

You days are numbered.

all he has to do is hold elections, n he'l win atleast 70%... but that would shatter the lie that he is loved by 99% of the ppl, and a couple elections later the baath party would no longer exist... He can stop the bloodshed right now but he loves power too much.

According to a popular commenter on Naharnet who goes by the nickname of Gabby, "ASSad" (his words) still has one month left because two months ago, Gabby (a hallucinator jerk like Dr. Falso Always Wrong) predicted that "ASSad" has 3 months before he gets toppled. It is also worth mentioning here that Gabby, in 2005, predicted the imminent demise of the "ASSad" regime. I am not so sure how much longer we will have to wait!!! But I certainly hope Gabby will be around if and when this will occur. Good luck, hopeful hallucinators, and keep on puffing while uselessly huffing. Heard cheikh Imbecile is a known puffer, too! It figures.

logically,it seems that in syria nobody can eliminate the other,the regime will not fall and the people will not go back: long civil war? it seems so, but definitely bashar is not so stong as a ruler as b4 mach 11.
which means logically in lebanon the balance of power will adjust ,no doubt about it, it is no surprise that the intelligent strategic walid beik will ripe the results , how and when? it is like cash to grab!

I really can't understand this Assad. he's talking about foreign intervention when he was always interferring into the affairs of Lebanon for over 25 years with his father. I would support him if he could piss off from lebanon for ever and never show us his ugly face. We are really fed up from this brutal regime and the Assad family. This family has proven to be so nasty and brainless they would kill everyone to remain afloat. No and many nos. They shoudl go and go soon. Let the Assad and his gangs pack and leave us for good. But wait, who is going to pay the price of killing more than 5000 people and the missing of many syrains and lebanese in his jail. He has to pay and pay dearly. His mantra of terrorists in Syria can't be swallowed. He needs to go now.

Bashar is an idiot and he is his own worst enemy. Did he really think that events are gona unfold the way they did?..where is his "khilsit"?you can easily tell of his low IQ, unusual long neck and horrible "s" in his speech. His end is going to be horrible and he will be betrayed by his closest one day, he is simply not smart enough to exit on time. The smartest one so far was zain abdeen who preferred to run than be wanted by world courts.

How about this to clear all the confusions? allow the United Nations (neutral team) to enlist the names of the 3000 killed. If you claim that those are armed groups and terrorists then there is nothing to hide or fear. Same story as Hizbollah not funding the STL because they found the truth, therefore it is a joke now but before it was voted by the majority to fund this project and find the true killers of ALL assassinated Leb figures. Why do not we hear about the investigation of the killers of Mughnieh where he was hiding? Do not sell me the Mossad MP3 song but seek the truth and the bank that had unusual money transfer for killing him.

I beg to differ. Reform shall begin after all Sunni crazies are pursued to the end of the earth and terminated. The sooner this is achieved, the sooner reforms will take place NATURALLY.

Liar and changes his story daily. reforms to dismantle armed groups? that's not what he said before. Why are the army generals and some politicians are defecting? Is this part of the reform? or they oppose the new reform?
God Bless Saddam, he always used to say about your dad that he is the biggest CIA agent.

How can the persons causing the problems for the Syrian people, the ones killing them in the streets and in their homes, the ones stealing the money and torturing them be the ones to make reforms?

There's no need for Assad style reform, there's need for jail time and regime change. Funny that a dictatorship even older than the Assad one (Cuba) is sending someone to 'support' the people of Syria.

Wow....he told the ministers of Cuba and Venezuela. Nice examples.

Yeah right... And the Pope is Jewish... Don't insult our intelligence you poor excuse for a human being and pretending to be a democracy advocate... You make Hitler look like a choir boy...

assad promised reforms the day he took power.... what reforms did he do so far? so why trust him now?