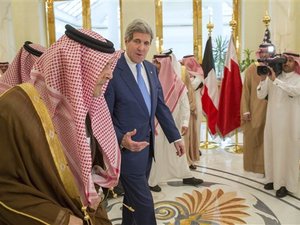 Saudi Foreign Minister Prince Saud al-Faisal called Thursday on the U.S.-led coalition conducting air strikes against the Islamic State group in Syria and Iraq to fight the jihadists on the ground, as U.S. Secretary of State John Kerry noted that military pressure may be needed to oust Syria's President Bashar Assad.

Saudi Arabia, part of the anti-IS coalition, "stresses the need to provide the military means needed to face this challenge on the ground," Faisal said during a press conference with Kerry.

Several Arab countries have joined the air campaign against IS.

U.S. President Barack Obama, anxious to avoid a drawn-out ground war, has backed an air campaign but ruled out deploying boots on the ground.

Meanwhile, Faisal warned of Iran's growing role in Iraq, accusing the Shiite-dominated Islamic republic of "taking over" its Arab neighbor through its aid in the fight against IS.

"Tikrit is a prime example of what we are worried about. Iran is taking over the country," Faisal said of the late Iraqi dictator Saddam Hussein's hometown.

Kerry, however, said that Washington has "urged all Iraqi forces to avoid and prevent the abuse to civilians of any kind of activity that violates international norms, fuels sectarian fears, and promotes sectarian divides, and that includes Iran in terms of their activities."

The U.S. military's top officer, General Martin Dempsey, said Tuesday that Iran's help in an Iraqi offensive to recapture Tikrit could be "a positive thing" providing it did not fuel added sectarianism.

Sunni-dominated Saudi Arabia is wary of the ambitions of its arch rival across the Gulf.

But Kerry reassured that the United States is keeping an eye on Iran's perceived “destabilizing” acts even as the two nations try to reach a deal on Tehran's nuclear program.

"Even as we engage in these discussions with Iran around this program, we will not take our eye off Iran's destabilizing actions in places like Syria, Lebanon, Iraq and the Arabian Peninsula, Yemen particularly," he said.

Saudi Arabia and the five other Sunni Gulf nations remain wary about a rapprochement between Shiite-dominated Iran and Washington.

But Kerry underscored that "we are not seeking a grand bargain."

"Nothing will be different the day after this agreement, if we reach one, with respect to any other issues that challenge us in this region, except we will have taken steps to guarantee that Iran will not have a nuclear weapon."

Whether or not there is a deal, the U.S. will be fully committed to addressing other issues with Iran, "including its support for terrorism," he said.

The so-called P5+1 group of Britain, China, France, Russia, the United States and Germany is trying to strike an accord that would prevent Tehran from developing a nuclear bomb.

In return, the West would ease punishing sanctions on Iran, which insists its nuclear program is purely civilian.

Kerry also noted that “military pressure” may be needed to oust Syria's Assad.

"He's lost any semblance of legitimacy, but we have no higher priority than disrupting and defeating Daesh and other terror networks", he told reporters, using an Arabic acronym for the Islamic State group.

"Ultimately a combination of diplomacy and pressure will be needed to bring about a political transition. Military pressure particularly may be necessary given President Assad's reluctance to negotiate seriously."

and those fighter planes that bomb ISIS daily are what and by whom? Iran?

mowaten, you're so hilarious it leaves me speechless! This is just too much imagination, originality, wit, and humor for just one man! Did you come up with this on your own?

Indeed, the two crooks decides together, how to further escalate the tensions around the region. They love it, the way it is now and they will work to make it worse.

Is that a martyred Jihadi Terrorist Iranian Farsi Familia in your avatar?

You fail to mention, the funding and training these people provides for takfiri groups. Texas, did you read about the latest incident with the so called moderate rebel group turning into Al Nusra?

It is happening all the time, the Americans provide TOW missiles and the foreign takfiris recieves it all. All they have to do is go to their local "moderate" rebels next door, take all their armory and leave.

lol anonyme this must be the best one so far. taking iraq as a model of success... 12 years after the "democratic solution" imposed by US bombs (which caused several times more deaths than seen in syria), the country is still a bloody chaos, facing the same threats as Syria, and fighting the same enemy (which, by the way, could have never existed during saddam era)

Plus the US and Saudis have no say in who runs Syria, Bashar was re-elected by his people in a landslide vote and is here to stay. with or without your barking, but with HA and Iran's backing, Bashar will defeat the US/raeli wahhabi puppets.

And thanks for the article Mystic, pretty interesting to see how rebel militias collapse the second US cuts their funding, and how they are so "secular" they instantly join islamist groups... Anybody still believes these "rebel" groups are any different from each other, in ideology or origin?

lol how do you make those irrational links in your twisted little head will always remain a mystery. You never get tired of those propaganda fabrications do you?

I see mowaten brought in his "other" personalities to defend him. hehehe enjoy! It couldn't be any clearer:)

I'm not "kiserwani.bimoss", and I actually don't condone this kind of language.
Whoever you are, please, I urge you to stop doing this. It's pointless and brings us down to their level. We have something much more powerful than insults that we can oppose to their lies and hate, and that is simple truth.

Yes southern, it's the plan. Every group they trained armed and funded ended up with nusrats or daeshits...

the mouthpiece says "and I actually don't condone this kind of language. "

You thrive on making these accounts and insulting people. Do you remember why you were banned the first time around? Do you remember what you referred to Geagea as? I still have your statement..... What a hypocrite! Everybody knows your game already:)

The Americans & Saudis provides takfiris "moderates" better weapons, than they give to the Lebanese Armed Forces.

Yes sure, the Assyrians & the Yazidis whom never fired a shot at the takfiris impaled themselves aswell in those conflicts? Anyone considered a kaffir (infidel) by your so called "Moderates" will be beheaded and get the same fate, doesn't matter what sect you belong to.

I will tell you something honest now Mr. American, mark my words now. You can tell the American lawmakers overthere.

If the U.S coalition decides to launch attacks on Resistance fighters inside Syria, Syrian Government troops etc. Then the Axis of Resistance will fire rains of rockets towards Israel and maybe even Turkey & Jordan.

Yes take it whatever way you wish, that is the truth here. If your beloved IDF and U.S/Gulf decides to attack from two sides, then they will be met with counter attacks.

Not quite, actually been waiting for it for sometime now. Never doubted for a minute that the U.S wouldn't attack later on, they might do it sooner or later. Just wanted you to make sure, that the Resistance are ready for such adventures.

Habibi, death is part of life. To be afraid of it is to be afraid to live. It walks hand in hand. Americans believe they live forever though, which is why your agenda is weakest.

I like to believe what you are saying. However, all indications on the ground indicate a close co-ordination between Iran and the USA in Iraq and Syria, even in Yemen. Dempsey just said the direct Iranian involvement in Iraq is something positive. The USA and the Obama Administration are somehow content to see Assad remain despite many "redlines" being crossed. It seems the USA is agreeable to letting Shia Iran tear the Middle East into pieces. Iran already controls 4 Arab capitals which they have boasted about on several occasions. I don't trust the U.S intentions or their foreign policy.

Shameless!
God's blessing are only bestowed upon the great Supreme Leader of the Islamic Republic of Iran Sayyed Ali Hosseini Khamenei and nobody else. These mortals are sinful beings and cannot be compared to the holiness of our Supreme Leader.

let the down votes begin:)!