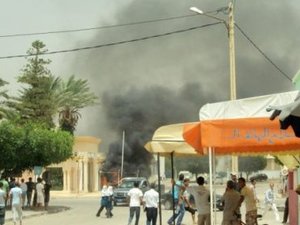 Around 300 Tunisian Salafists on Sunday attacked the headquarters of a private TV station that aired a French-Iranian film and organized a debate on religious extremism, the channel said.

"Three hundred people attacked our offices and tried to set fire to them," Nessma chairman Nebil Karoui told AFP, explaining that death threats had been sent after Friday night's showing of "Persepolis", an animation film on Iran's Islamic revolution.

The interior ministry's spokesman, Hichem Meddeb, confirmed the incident and said that up to around 100 people had been rounded up.

"Some 200 Salafists who were later joined by another hundred people headed towards Nessma to attack the station. Security forces stepped in and broke up the posse," he told Agence France Presse.

"After we aired 'Persepolis' on Friday, there were messages posted on Facebook calling for Nessma to be torched and our journalists to be killed," Karoui said.

"Persepolis" is an internationally-acclaimed French-Iranian animation feature based on Marjane Satrapi's autobiographical and eponymous graphic novel.

It describes the last days of the U.S.-backed shah's regime and the subsequent 1979 revolution led by Ayatollah Khomeiny through the eyes of a young girl.

The airing of the film in the local dialect was a first in Tunisia.

"We are used to threats but what is alarming is that this time they put words into action," Karoui said.

"Nessma is the progressist channel in the Maghreb and we will not be deterred. We will continue to program whatever we choose. We did not kick one dictatorship out to bring in another," he said.

Salafists are one of the most conservative and radical currents in political Islam.

Many observers have voiced fears that the Arab Spring -- which started in Tunisia -- would herald the rise of Islamist hardliners across the region.

But the country's leading Islamist political party, Ennahda, condemned the attack, calling it an "isolated incident" that should not provoke concern about growing radical influence.

"We can only condemn this type of incident," Samir Dilou of Ennahda's political bureau told AFP.

"If people have criticisms against Nessma, they must express themselves in the media, not use violence."

Dilou said he had not seen "Persopolis" and therefore declined to offer an assessment of the film.

"When confronted with this type of incident, it is necessary to apply the law. There is no need to be alarmed," he said.

Ennahda is considered a favorite in elections scheduled for October 23, where Tunisians will choose members of a constituent assembly tasked with crafting a new constitution.

In June, six Salafists were arrested in Tunis after they stormed a cinema and broke its glass doors in a bid to stop the screening of the film: "Neither Allah nor Master" on secularism in Tunisia.