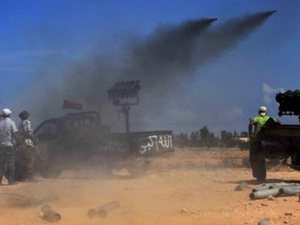 Forces of Libya's new rulers said they took control on Sunday of the airport in Bani Walid, one of the last two bastions of fighters loyal to deposed despot Moammar Gadhafi.

"Our forces have taken control of the airport of Bani Walid," located in the desert town's southwest, Yunes Mussa, commander of the National Transitional Council forces in the region, told Agence France Presse.

According to the joint command in Tripoli, heavy fighting was raging on Sunday between NTC fighters and loyalists of the fugitive Gadhafi around a kilometer (less than a mile) from the downtown area, which residents have abandoned.

The NTC forces have been trying for a month to gain control of Bani Walid, an oasis in rugged terrain where Gadhafi loyalists have been putting up fierce resistance.

NTC commanders are convinced that Gadhafi's most prominent son, Seif al-Islam, is in the town, as well as possibly the deposed strongman himself.