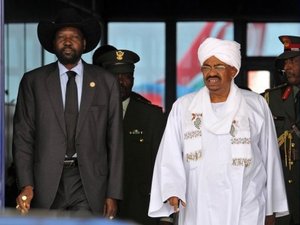 Sudan has set deadlines to resolve outstanding disputes with the south, President Omar al-Bashir said Sunday, as a top-level southern delegation wrapped up its first visit to Khartoum since independence.

"We have agreed to have committees and have given them deadlines to reach a solution on all the pending issues," Bashir told a news conference, standing alongside South Sudan's President Salva Kiir.

The failure of the two parties to resolve certain key issues, including oil and borders, and the ongoing conflict in Sudan's border region, where the army is battling rebels with historic ties to the south, have badly strained north-south relations.

No breakthrough deals were announced before Kiir's team departed for Juba.

But the two presidents on Sunday reaffirmed their intention to work together for peace and stability, and to put the years of conflict behind them, during a cordial visit that seems to have set the stage for future negotiations.

"My government is ready to discuss any final solutions on all outstanding issues, being on the economy, security, borders and Abyei's status," Kiir told reporters.

"My brother al-Bashir and I myself are committed to ensure that none of these issues will take us back to war.

"There might be some elements on both sides that would like to take us back... to war. But I repeat, we left the war station behind in 2005."

South Sudan proclaimed independence from the north on July 9, after 22 years of devastating civil war, in which some two million people died.

The conflict, which was fuelled by religion, ethnicity, ideology and resources such as oil, ended with a 2005 peace agreement but left the south in ruins.

Efforts to regulate Sudan's political and economic division, both prior to and since partition, have made only limited progress.

Khartoum has insisted that future talks should take place directly between the two parties, without external mediation.