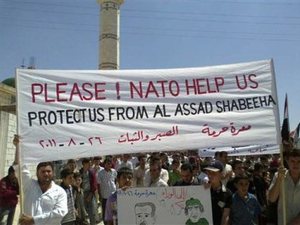 Foreign Minister Walid Muallem warned that Damascus will retaliate against any state that recognizes the Syrian National Council (SNC), formed in Istanbul in late August and uniting the key groups opposed to Assad's rule.

"We will take significant measures against any country that recognizes this illegitimate council," Muallem told reporters, as the SNC lobbied for support in Cairo where the Arab League is based.

The SNC groups the Local Coordination Committees (LCC), an activist network spurring protests in Syria, the long-banned Muslim Brotherhood as well as Kurdish and Assyrian groups.

"There are groups carrying out acts of violence in Syria and who have killed a great number of martyrs. The West speaks of a peaceful revolution and does not admit these groups exist but arms them anyhow," Muallem said.

He also issued a thinly veiled warning to Turkey, which has condemned Friday's assassination of Kurdish politician and SNC member Meshaal Temmo as a "loathsome" act.

"Syria will not stay with its arms crossed. If Turkey throws us a flower, we will send them one back," he said.

Assad told a visiting delegation from Latin America that Damascus was focusing both on reform and neutralizing the "armed groups" it blames for the unrest sweeping the country since mid-March.

"Syria is taking steps focused on two main fronts -- political reform and the dismantling of armed groups" seeking to destabilize the country, he told the Cuban and Venezuelan foreign ministers.

Assad said "the Syrian people had welcomed the reforms but that foreign attacks intensified just as the situation in the country began to make progress.

"Despite everything, a process of reform is under way," he said.

Six people were shot dead in the Karam al-Seitun district of Homs and another was killed in the Bab al-Drib area, the Britain-based Syrian Observatory for Human Rights said.

It said security forces also shot dead at least three people at the funeral in the Damascus suburb of Dumeir of a youth who died in prison on Saturday, and that a fourth was killed by gunfire in Hama, also in central Syria.

The Observatory also said three soldiers were killed in Hama province in clashes with armed men who appeared to be military deserters.

Sunday's killings came a day after two people were killed at the funeral of Temmo, who was assassinated at Qamishli in the north on Friday.

They also coincided with the visit by the Latin American group in Syria to "show support."

The foreign ministers of Venezuela and Cuba are heading the delegation of leftist Latin American countries, including Ecuador, Nicaragua and Bolivia.

"We reject all forms of interventionism that the empire is trying to apply as it did in Libya for a violent process of regime change."

Washington has renewed its calls for Assad to step down immediately amid escalating violence against anti-regime protesters that the United Nations says has left nearly 3,000 people dead.

Turkey, formerly an Assad ally, has kept constant pressure on Damascus by hosting gatherings of Syrian dissidents and repeatedly calling on the regime to introduce reforms.

Temmo's assassination, which sparked widespread international condemnation, was blamed by Damascus on a "terrorist" group.

Washington has charged that Assad's regime was escalating its tactics against the opposition with bold attacks on its leaders, while the LCC inside Syria has accused Damascus of trying to "physically eliminate" top dissidents.

The SNC is courting foreign recognition and plans to hold a meeting to elect its leadership, a member of the exile group told Egypt's official MENA news agency.

Moscow said on Saturday it would receive Syrian opposition politicians on Tuesday for unofficial talks and that it also expected to host a visit from SNC delegates later in the month.