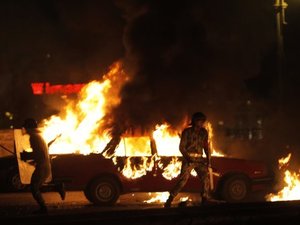 The Egyptian government was set for crisis talks on Monday after clashes left 24 people dead, raising fears of widespread sectarian unrest that threatens to widen the cracks in an already fragile transition from Hosni Mubarak's regime.

The meeting came as at least 40 people were arrested in central Cairo overnight after a demonstration by Copts in the Maspero district degenerated into deadly clashes that left more than 200 people wounded, a security official told Agence France Presse.

It was not immediately clear how many of those detained were Muslim or Christian.

A curfew was imposed overnight in parts of the Egyptian capital following the clashes.

Coptic Christians had been holding a demonstration to protest against a recent attack on a church in the southern Egyptian city of Aswan when the clashes started, sparking further fighting later near the hospital housing the mortuary.

In a late night address, Sharaf called on Egyptians "not to give in to sedition", warning that Egypt is "in danger."

At least five of the dead were mown down by a speeding army vehicle, a priest from the minority Coptic community said, while an AFP correspondent saw other bodies with gunshot wounds.

Grand Imam of al-Azhar Ahmed Tayyeb called for crisis talks between Muslim and Christian leaders later on Monday "in a bid to contain the crisis", state television said.

"A black night for Egypt's revolution," thundered the independent daily al-Shorouk in its front-page headline.

The independent al-Masry al-Youm simply wrote "Egypt", with the letters bleeding into pictures of clashes and destruction in central Cairo.

Some warned of an all-out civil war if the root causes of the clashes were not addressed.

"There needs to be serious action from the leaders to resolve the root causes. Otherwise this could lead to civil war," said Fuad Allam, who headed Egypt's security services for two decades.

He told al-Arabiya satellite television that discriminatory religious laws had to be amended.

But others say the clashes were not merely sectarian in nature, but fuelled by the anger towards security services and the ruling military council.

Some activists blamed government-backed provocation for the bloodshed which has triggered fears of worsening sectarian strife.

Users of social networking sites such as Twitter said the earlier clashes were provoked by "thugs" at the scene, while state television was accused of fanning anti-Coptic sentiment.

As the military police gave assurances that calm had returned to the capital, Sharaf warned on public television that Egypt was "in danger" following the most serious clashes since Mubarak was ousted in February.

Sharaf, appointed by the military council that took power after mass protests led to Mubarak's downfall, heads a caretaker government ahead of elections the council has pledged will be democratic.

Copts complain of systematic discrimination, but since Mubarak's fall, tensions have also mounted between the military -- initially hailed for not siding with Mubarak -- and groups that spearheaded the revolt, which say the army is reluctant to carry out genuine reforms.