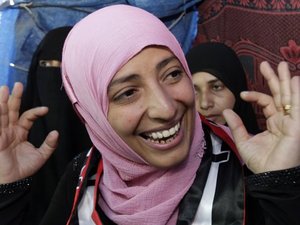 The women were attacked on Sunday evening in the city of Taez as they marched in support of Karman, the first Arab woman to win the prestigious award.

"We were attacked by regime thugs with empty bottles and stones," an organizer told Agence France Presse on Monday on condition of anonymity.

The Nobel Prize Committee awarded Karman the 2011 Peace Prize recognizing her role in the months of peaceful protests in Yemen that have called for President Ali Abdullah Saleh to step down after 33 years in power in Sanaa.

In a separate incident early on Monday, three people were wounded in clashes between loyalist security forces and armed tribesmen opposed to Saleh in the central Rawdah neighborhood of Taez, medical officials said.

Taez, some 270 kilometers (170 miles) southwest of the capital Sanaa, has been a focal point of tension since protests against Saleh erupted in January.