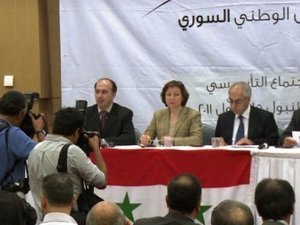 The European Union is set to hail the formation of a Syrian opposition bloc as "a positive step forward", according to a draft EU foreign ministers' statement seen by Agence France Presse on Monday.

In the draft statement, the ministers, referring to the Syrian National Council (SNC), say the EU "welcomes the efforts of the population to establish a united platform" and "notes the creation of the SNC as a positive step forward".

The EU "calls on the international community to also welcome" the formation of the SNC and "welcomes its commitment to non-violence and democratic values".

Foreign Minister Walid Muallem warned that Damascus will retaliate against any state that recognizes the SNC formed in Istanbul in late August and uniting the key groups opposed to Assad's rule.

"We will take significant measures against any country that recognizes this illegitimate council," Muallem told reporters, as the SNC lobbied for support in Cairo where the Arab League is based.

The SNC groups the Local Coordination Committees (LCC), an activist network spurring protests in Syria, the long-banned Muslim Brotherhood as well as Kurdish and Assyrian groups.

if only they haven't been filmed in zionist entity talking to zionists...than they could fool someone...

@habal kamel
you are a disappointment to our country, that is if you were Lebanese.
why are you meddling with syrian affairs?
the SNC represents the syrian people, so keep out of their affairs ::)
your patron assad is on the way out, and you have two choices: follow him or return to the Lebanese values and give up your weapons.

What a big joke .