More than 30 Killed in Syria Violence 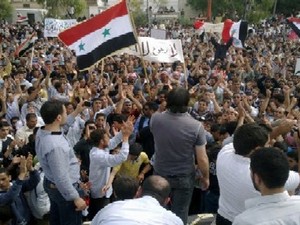 At least 14 civilians and 17 security personnel were killed in clashes across Syria, with the flashpoint city of Homs turning into a battle zone, activists said on Monday.

Seven of 14 civilians killed on Sunday were gunned down by security forces in the city of central Syria, the Britain-based Syrian Observatory for Human Rights said, adding that seven others were killed in other towns.

"It was like a war scene in Homs where blasts and sound bombs were heard all over town, with heavy machineguns also being fired," said the Local Coordination Committees (LCC), which organizes protests on the ground.

"A lot of homes were destroyed. Nine people were killed and dozens wounded. Security agents and pro-regime militias prevented ambulances from evacuating the wounded," the LCC said.

It said the regime "attacked the Homs region in yet another desperate effort to make its free residents bow and to snuff out the revolution."