PSP: Taymour to Run Normally in Elections, Remarks on 'Ceding Seat' to Him in May Inaccurate 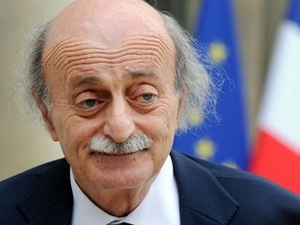 The Progressive Socialist Party clarified Tuesday afternoon the content of an interview for party chief MP Walid Jumblat with As Safir newspaper, noting that his son, Taymour, will run normally in parliamentary elections “just like other candidates.”

The line saying “Jumblat will hand over his Shouf parliamentary seat to his son Taymour in May” was “inaccurate”, the PSP said in a statement.

“Taymour will run normally in the elections, just like other other candidates,” the statement added.

In the interview published earlier on Tuesday, the PSP chief said Speaker Nabih Berri promised him to hold by-elections in May after the announcement of his resignation from parliament.

By-elections would then be held in “Shouf, Jezzine (to replace the late Michel Helou), and Zgharta – if Marada Movement chief Suleiman Franjieh resigns from parliament to allow the nomination of his son Tony,” As Safir quoted Jumblat as saying.

Last year, Jumblat said that he would not run for a parliamentary seat but will remain a political observer.

“After 37 years in politics I have had a rich experience, which included some black marks, but it's up to history to write it... I will not write my biography... Let others do,” Jumblat said back then.

In his remarks to As Safir, Jumblat also accused Lebanon's Maronite Christians of being “suicidal.”

“I know that some people will get upset but I should tell the truth. Maronites are experts in committing suicide,” Jumblat said.

“Lebanon has become the sole focal point for the existence of Christians in the Orient.

“They should deal with the presidential elections with humility and pragmatism so that they preserve their role,” he said.

The PSP chief seemed not to be optimistic that a president would be elected soon as the vacuum at Baabda Palace approaches the one year mark.

He called for “coexisting with the vacuum and improving the conditions of the crisis' management by consolidating the work of the government.”

Jumblat also told As Safir that he would testify at the Special Tribunal for Lebanon next June. But that he would avoid talking too much.

Officials and journalists who were close to ex-PM Rafik Hariri have been testifying in court on the former prime minister's deteriorating ties with Syria, the neighboring country's increasing resolve to have more influence on Lebanon's internal affairs and growing concerns by the international community regarding the foreign political pressure exerted on Lebanon.

The STL is tackling the Feb. 2005 assassination of Hariri and 22 others in a major bombing on the Beirut seafront.

Jumblat, a centrist, criticized the March 14 alliance for “wasting a historic opportunity to change the course of events following Hariri's murder.”

“It ended up being without a political platform,” he said.

He called for “coexisting with the vacuum and improving the conditions of the crisis'
That is exactly what the terror party wants and has so far succeeded in doing thanks to aoun who claims he protects Christian rights.
The country is existing without a Christian president and Jumblatt is calling for adapting to the vacuum just like he has been calling for adapting to the existence of the terror party. As to his resignation in May, nothing will change since he groomed his son to carry on with the same divisive policies.

In a way, he is right about the Maronites; they are their own worse enemy.

I wonder how the final touches are coming along to your final destination dear Flamethrower..... RIP Shia Hero

Mr.Jumb. I always thought of you as one of the silliest and hollow men who is devoid of wisdom and common sense. Indeed, you make a good service for yourself by retiring from the stage of jokers

...."He also told As Safir that he would testify at the Special Tribunal for Lebanon next June. But that he would avoid talking too much."
So, Mr Jumblatt, why waste money on a ticket to Hague if your not willing to tell everything?

Inshallah you resign John Tiler! You've been teasing us for the past year with your retirement! Even though we will miss your expertise on the Maronites (Jins el Atle) and our suicidal tendencies! Your father taught you well! Lets all forget that you and your presidential candidate Henri Helou, could immediately end this presidential impasse by siding with one of the real presidential candidates! Pick Aoun or Geagea and retire already!

Why do you point the finger at one person, ado?

You dissolved all responsibility from HA & Mustaqbal & laid all the blame on one man.

Poor posting...I respect Jumblat who is doing the best he can for his sect..after all Lebanon is a sectarian state...The Druze are very lucky to have such a man in their corner...he likes to hold an ace up his sleeve...not his fault the rest are awaiting outside orders, is it?

I say give this man Lebanons highest order of merit.

Why do you support or condone his sectarian stance? He should think 1st about all Lebanon and not his sect! This is whats wrong with Lebanese politics and Jumblatt is the king of this problem and system! He sold his soul to the PLO against the LAF, then to Israel, then syria and saudi arabia, then hezbollah before returning to Dick Cheyney and Condaliza Rice's bitch... Then back to syria and hezbollah before back to KSA and all the time the agent of M16 and never pro Lebanon! The only thing supports this guys existence is the Lebanese republic and he is the master of manipulating it enough so it doesn't collapse but never prospers... any other country... Its called Treachery!

I don't condone it, ado..its reality....You are right about the problem with lebanon though..it needs to become Lebanon first, sect second.

Not how it is though...when it does, i'll agree with your pointing the finger at any person protecting his sect...until then they all do it & take orders from abroad....Harriri , SHN etc.

You hate Geagea more than you hate Aoun and you would rather Lebanon burn than allow either one reach the presidency! As long as the Chouf doesn't burn along with the rest of Lebanon! As soon as your fiefdom is at risk, you will jump and suck the side that can protect you. The arsonist with an extinguisher for only your fiefdom!

Because they carry no weight & would bounced around like a football.

You need a Pres with weight...who carries the weight of the Christians, coolmec?

deal with it or go have a cry.

the roar is right... Yes a different option would be nice but why is it the most popular shiite is the speaker, the sunni approved or most popular, the PM but the president has to be some one without popular street and parliamentary support but "consensual"? Maybe this is the last goal post we must move through so we can move on from Geagea and Aoun and the embarrassment and isolation of the christians since the syrian occupation of Lebanon from 1990?

marcus. Berri has huge popular base amongst the shiites. Omar Karami had a strong base in tripoli. Salam was appointed by the mustaqbul movement. Only miqati is an instance of a "consensual" PM. The president should also come from a strong popular and political base!

Sad to read your reaction ya roar and ado
you are so polarized it is unreal. When are you guys going to wake up and realize it is great time to replace our long time leaders.?
what about the will of the people? can't you see that most are clamoring for change?
pity the nation

Its even sadder when people like you, coolmec, don't bother to read what Ado posted or simply discard it because it doesn't suit your agenda.

When you want to remove the leader that represents the majority of Christians for pres in order to have an all out new fresh blood, you must first remove the PM, Speaker etc .

That's ado's point...yet you failed to comprehend & rushed to post your self righteous BS.

Please read before making a tool of yourself next time.

that is why FPM is run like any feudal party... all close members of aoun at key posts, and quick wealth made in a few years time... LOL
so please spare us " we are the cleanest party " crap... everyone knows they are just like the others, making money on the back of lebanese....

@roar
No you failed to understand. You are simple absorbed by your ignorant love to a lunatic called Aoun to the point you can't even think or imagine a better alternative. Please do not tell me that Aoun represents the majority of the Christians this is delusional.
Lastly if you read well my comments I did say remove all politicians and get new blood and that includes berry gemayel junblatt etc.. all these feudal families. Ah junblatt is resigning and his son is replacing him. what a farce. just like Aoun imposed Bassil in every govt notwithstanding the fact he lost parliamentary elections....
Pffffffffffffffffff

I understand exactly what your point is...But your only repeating the M14 call to undermine the Pres by advocating a neutral or consensus Pres.

Yet no one ever touches the issue of Prime Minister or speaker. why?

when you have M14 consensus that all the posts need to be new blooded consensual etc, then you may re-start your campaign against the Pres.

Jumby you're an expert in changing stances and being a coward. Anyone that says youre doing so for the sake of your sect is dellusional- you do it for yourself only.
Please don't comment on the Maronites- the real problem is that they weren't experts in homicide against you