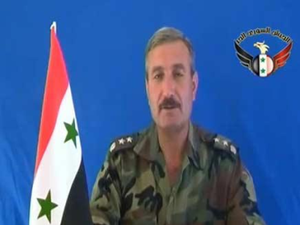 A Syrian army defector has called for military aid to help his armed opposition group topple the Damascus regime, in an interview published in Turkey on Monday.

Colonel Riad al-Asaad, who defected in July, appealed for weapons for an armed opposition group he set up called the "Syrian Free Army".

But he rejected any direct foreign military intervention in Syria in the interview published by the English-language Hurriyet Daily News on Monday.

"If the international community helps us, then we can do it, but we are sure the struggle will be more difficult without arms," he was quoted as saying.

But he added that "nobody is in favor of any foreign country’s intervention into Syria".

Assad defected from the Syrian Air Force in July and is currently staying at a refugee camp in Turkey's Hatay province, home to around 7,500 Syrians who fled the violence.

He said he was in touch with the Syrian National Council, an opposition bloc set up during talks in Istanbul last month to unite opponents of President Bashar al-Assad's regime.

Turkish Prime Minister Recep Tayyip Erdogan is shortly expected to announce sanctions against Damascus in protest at the five-month crackdown, which according to the UN has claimed the lives of around 3,000 people.

The SNC groups the Local Coordination Committees (LCC), an activist network spurring protests in Syria, and the long-banned Muslim Brotherhood as well as Kurdish and Assyrian groups.

This is now inevitable the Free Syrians need to protect themselves and their families, So be it..., All the Best for these brave Freedom.soldiers, with men like these Syria and the ME will definitely wake up from this 40 year old Nightmare called the Assad Family regin of terror.