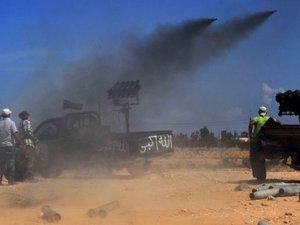 Seventeen fighters of Libya's new regime were killed and 50 wounded in clashes with Moammar Gadhafi loyalists in the desert town of Bani Walid, a military official in Tripoli said on Monday.

"We lost 17 fighters in fierce clashes on Sunday and our forces have withdrawn from the airport where they had taken control," said Salem Gheith, head of the National Transitional Council (NTC) military command center.

The military spokesman for Libya's new leadership said NTC fighters also pulled back late on Sunday from forward positions in the town, 170 kilometers southeast of Tripoli, in what he termed a "tactical pullback."

"We've received reinforcements from Tripoli and the Nafusa Mountains, and we will resume the offensive," he said.

Yunes Mussa, the NTC commander for the region, announced the capture of the airport on Sunday, before the fightback by pro-Gadhafi forces in Bani Walid, a holdout of the fallen strongman along with his hometown Sirte.