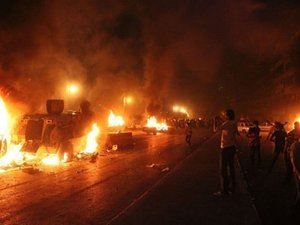 "I am very concerned, very alarmed about the clashes in Cairo", said British Foreign Secretary William Hague as he arrived in Luxembourg for talks with his 26 EU counterparts.

"It is very important that the Egyptian authorities reaffirm the freedom of worship," he added.

As the Egyptian government prepared for crisis talks following the unrest, Italian Foreign Minister Franco Frattini called for an EU "condemnation of the very serious violence against Christians, the Egyptian Copts."

Frattini deplored the fact that Christians were massively fleeing the country in what he termed an "exodus."

Noting there was currently "an escalation" in violence against the country's Christians, he added: "We hope the response of the Egyptian authorities will be more energetic than under (former president Hosni) Mubarak, which was insufficient."

His German counterpart Guido Westerwelle likewise was "very worried," adding that "this is a situation we cannot accept at all."

"It is time that the Egyptian leaders get to know how important religious plurality and tolerance are, and that all authorities in Egypt do their part to protect the freedom of religion," Westerwelle said.

Egyptian Prime Minister Essam Sharaf was to convene an emergency cabinet meeting on Monday afternoon after at least 40 people were arrested in central Cairo when a Copt demonstration degenerated into deadly clashes that left more than 200 people wounded.

It was not immediately clear how many of those detained were Muslim or Christian.

Coptic Christians had been holding a demonstration to protest against a recent attack on a church in the southern Egyptian city of Aswan when the clashes started, sparking further fighting later near the hospital housing the mortuary.

EU foreign policy Chief Catherine Ashton said the events would be discussed by the ministers.

"Freedom of expression and belief is absolutely fundamental to human rights," she said.

Ashton urged Egypt to move towards elections "with a desire to see all people part of those elections and to protect the people, whoever they are, wherever they come from, whatever belief and faith they have."

She added: "Egypt needs to move forward politically and economically against the backdrop of recognizing that what happened in the Arab Spring now needs to turn into a real democracy of a country where people can be proud and recognize their human rights."

At least five of the dead were mown down by a speeding army vehicle, a priest from the minority Coptic community said, while an Agence France Presse correspondent saw other bodies with gunshot wounds.

"A black night for Egypt's revolution," thundered the independent daily al-Shorouk on its front page.