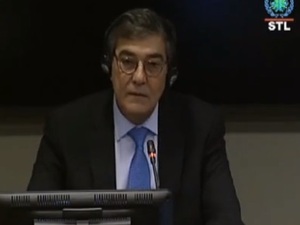 The U.N.-backed Special Tribunal for Lebanon disclosed Wednesday during a televised session an audio recording for a 2005 meeting that took place at the Qureitem Palace between ex-PM Rafik Hariri and then-chief of Syrian intelligence in Lebanon Rustom Ghazali.

The meeting -- which was also attended by Ad Diyar newspaper editor-in-chief Charles Ayoub -- focused on the electoral law that was being debated for the 2005 parliamentary vote.

The recording, which was put forward by the Prosecution, was played during the testimony of al-Mustaqbal bloc MP Ghazi Youssef, who was close to Hariri prior to his February 14, 2005 assassination.

The Prosecution said the STL had obtained the recording from slain Internal Security Forces Intelligence Branch chief Wissam al-Hassan, who was murdered in a 2012 car bomb attack.

The talks start with mutual compliments between Hariri and Ghazali. “There are some issues that can be resolved through goodwill and honest brotherly dialogue and nothing is worthy of dispute,” the latter tells Hariri.

“Syria is the supporter and the cornerstone and I cannot tolerate any harm against it, even if – rightfully or mistakenly – we feel that it has erred against us … We do not accept to see it being attacked or insulted,” Hariri replies.

As for the electoral law, Hariri asked Ghazali to pass on a message to the Syrian leadership. “Tell your leadership that I have said this: if those who are in Baabda and the Grand Serail (then-president Emile Lahoud and Omar Karami's government) draft a hybrid (electoral) law, you will be the ones to pay the price.”

Hariri added: “Why do we need to breach the Taef Accord?”

“The only thing that would harm you is an (electoral) law based on districts and other formulas cannot harm you,” he went on to say.

Again he asks Ghazali to deliver a message to the Syrian leadership.

“Why wasn't Marwan's file referred to the Judicial Council? Before you leave this place, call (then-justice minister) Adnan (Addoum) and tell him to raise the issue,” Hariri says.

Hariri was assassinated in a massive bombing that targeted his convoy in central Beirut on February 14, 2005.

The STL is trying five Hizbullah members in absentia over their alleged involvement in the murder.

Hmmmm sounds very fishy I am sure the Israelis recorded all these numbers the Syrians could never mean Lebanon any harm. After you did hear the words about brotherly love et all.

So he was a collaborator with the Syrian regime. Who wasn't/isnt'? Those you think most vehemently oppose it today had all been collaborators mind you (and probably are to this day in many respects).

There is no doubt that the Syrians did it.