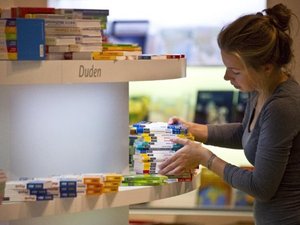 The world's biggest book fair, due to open Tuesday, wants to put paid to fears for the survival of the book in its traditional, bound form in the face of its digital rival's growing popularity.

While electronic books and other gadgets have been all the talk of the Frankfurt Book Fair in recent years, industry movers and shakers say the future of both ebooks and printed books is safe.

"The printed book and the digital book will both be at the center of the publishing place and the art of publishing," Gottfried Honnefelder, president of the German Booksellers' and Publishers' Association, said.

"In the coming years, they will come on together and not eat each other up," he told a news conference in this western German city ahead of the official opening of the five-day fair.

Although the ebook market in Germany is still very small, he said it was expected to jump from its current share of about one percent to between five and 10 percent in five years.

At a recent conference on the publishing industry's future up to 2025, participants had forecast growth for the book market, he said, adding however that sales were down by two to three percent so far this year.

The challenges thrown up by the upheaval in the book world will be a central theme at the fair, including for authors who once just had to deal with a publisher but must now also negotiate TV, film and gaming rights to their works.

Buying and selling of rights to works has soared by 30 percent in the last seven years, according to fair chief Juergen Boos, who urged authors and publishers to draw up business strategies that embrace multimedia interest.

"One has to consider in what way the book will be interactive," Boos told the news conference.

Experts and stars of film, the computer game industry and music world are also scheduled to take part in discussions on the convergence of media and its future landscape.

Iceland, as guest of honor, will shine a spotlight on its literature, past and present, during the showcase of some 7,500 exhibitors which opens to industry insiders on Wednesday and to the public on Saturday.

About 40 Icelandic authors will attend, including internationally known crime writers, Arnaldur Indridason and Yrsa Sigurdardottir, while a new German translation of the 10th and 11th century Icelandic Sagas will also feature.