Report: Saniora to Present Testimony before STL on Monday 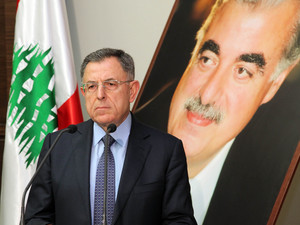 Head of the Mustaqbal parliamentary bloc MP Fouad Saniora is scheduled to present his testimony before the Special Tribunal for Lebanon on Monday, reported al-Joumhouria newspaper on Saturday.

Widely-informed sources told the daily that the testimony “introduces a new phase of the trial.”

“This phase may be among its most important so far,” they added.

They predicted that Saniora's testimony and the expected one of Progressive Socialist Party leader MP Walid Jumblat may be among the most significant in the trial.

Jumblat is expected to make his testimony later this year, probably in June, said al-Joumhouria.

The STL is looking into the 2005 assassination of former Prime Minister Rafik Hariri in a massive bombing in Beirut.

A number of witnesses, including prominent lawmakers and journalists, have so far presented their testimony at the trial that kicked off in 2014.

The March 14 camp has repeatedly accused Syria of being behind Hariri's murder and the political testimonies have focused on the role the Syrian regime played in Lebanon prior to 2005.

The STL had so far indicted five Hizbullah members of being linked to the crime.

The party had denied the claims, slamming the tribunal as an American-Zionist entity bent on destroying the group.

Don't be surprised if then (or before giving testimony) he ends in a car "accident" or in another strange death implemented by the "Party of God"...

Actually, this spirit of killing is so easy and never bothered people like you, whether Aouni or Hizbo zbalah or in between, your taking a route that is very hard and ni matter how we try to convince you you will alway show an ugly side. WELL, I wish you all the good, and hooe you change for the better just try to apply what you say to yourself and think about it.

only yesterday you were denouncing what you described as atrocities in Yemen. Today you are calling for the assassination of an innocent civilian. What kind of person are you?

I often wonder how you are as you lay in pieces and tranquility at your final resting place dear flamethrower.... RIP Shia Hero

What alternative do u propose southern? Those assassination should be kept unsolved? Should lebanese judiciary (who is still waiting libanpost to sumom mamlouk) to do the job?
Go ahead tell us what do u propose?

Southern do u really believe what u are writting or is it just to reply?...
First if u are forced to negociate with the other camp even if he is behind assassnations u negociate, exemple are all over history (rival french faction negaciated after the ww2 so that they can build a country, german people to (or they would hv executed al who worked withl the nazis and there wouldn't be much german left), all lebanese parties during the war while bateling against each other use to negociate... Sorry man but it is a weird comment to say the less..

What kind of a comment is that flame?...
Too much chupachups man?...

Pajama boy, can u try to be less sectarian, hachem salman was a chiite and was assassinated in day light in front of our armed forces after being beatten by hezbos, saiyed el aminis a shiite and a muphti (sayda) how was kicked off from south lebanon after being beatten by hezbos...
Do u think that it is easy for them being forced to live under hezbos rule and no one to defend them?? hashem salman did diserve more than some word and article in locola journal, we were even unable to give him appropriate funeral...
Please stop the sectarian talk, hezbos hijacked the shiite community and what us to believe they are speaking above all shiite which is a lie, the scare them with hariri telling them he is "wahabis" while they do assaciate with hachem minkara and billal chaaban, and the few shiite who dare to talk against hezbos action get beatten or assasinated...

In lebanon the problem is not sectarian ,eventhough hezbos makes everything to make it look like this, our problem is with a sectarian milicia who is taking over the state, there are free progresist shiites who need all our support...

Again southern would u think that hezbollah or the islamic resitance batteling in syria under the banner of ya hussein, that the words of the iranian leadders, the action of the shiite iranian backed millicia all over the region have something to do with reaction like the one of pajama-boy?...

I agree,
HA and Assad both said they did not do it, they pointed finger at Israel. That should be the end of the story..... we could have saved 100s of Millions of Dollars. Why is M14 intent on implicating HA and Assad in this, strange indeed while turning a blind eye to the Zionists who killed not only Harriri but every Lebanese politician opposed to HA and Syrian occupation.