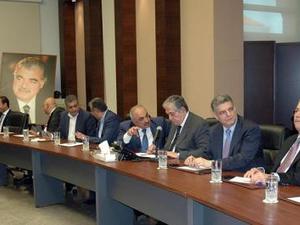 Al-Mustaqbal parliamentary bloc on Tuesday accused the March 8 forces of waging a “political media campaign” against its chief, MP Fouad Saniora, over his testimony at the Special Tribunal for Lebanon in The Hague.

In a statement issued after its weekly meeting, the bloc said Saniora has so far demonstrated “all the circumstances that Lebanon was going through prior to the assassination” of former premier Rafik Hariri, and the impact of “the oppressive interferences that were practiced by the Lebanese-Syrian security apparatus and its tools in Lebanon and Syria.”

In the first session, the former premier talked about Hariri's tense relation with the Syrian regime in the 2004-2005 period. On Tuesday, Saniora revealed that Hariri had informed him that he had discovered “several assassination attempts by Hizbullah” against him prior to the year 2005.

Days before Saniora's testimony, Arab Tawhid Party leader Wiam Wahhab described the ex-PM as “a component of the Israeli scheme,” which prompted Saniora to file a lawsuit.

In its statement on Tuesday, al-Mustaqbal noted that the testimony of Saniora, who was very close to Hariri, has unveiled “the motives behind the political media campaign that was waged by the March 8 forces ... in the days that preceded his appearance before the STL.”

It said the alleged campaign aims to “block the information that he might announce.”

“Those attempts did not stop in the past and will not stop now,” the bloc added.

The bloc “categorically rejects any interference in Lebanon's internal affairs,” it said, noting that “the Lebanese people who resisted the hegemony and subjugation attempts against their country will not yield or accept these new-old bids.”

Al-Mustaqbal also reiterated its call for the political forces to “reach an agreement over the election of a new president,” warning that “the continue vacuum will only aggravate the problems and woes Lebanon is suffering from.”

LebanonPoliticsSpecial Tribunal for Lebanon
Comments 0
Login to leave a comment