Saniora before STL: I am Not in Position to Say that Hizbullah Assassinated Hariri 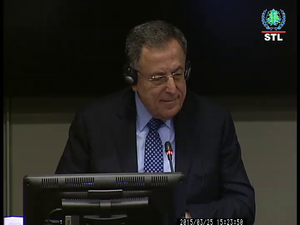 Head of the Mustaqbal bloc MP Fouad Saniora resumed on Wednesday his testimony at the Special Tribunal for Lebanon by being cross-examined by the Defense that focused on the Syrian and Lebanese security systems in Lebanon during the 1990s and up until the assassination of former Premier Rafik Hariri in 2005, as well as Hizbullah's role in Lebanon.

He said: “I am not in a position to say that Hizbullah assassinated Hariri”

“We want this tribunal to tell us who killed him,” he added.

Moreover, he revealed that Hariri “was clear in saying that the party's arms are an internal Lebanese affair that should be resolved through dialogue.”

On Tuesday, Saniora told the court that Hariri had confided to him that he had discovered several assassination attempts by Hizbullah against him.

He told prosecutors that Hariri had spoken to him of his concerns about his personal security around the end of 2003 or the beginning of 2004.

Addressing the Lebanese-Syrian security system, Saniora stated: “The system meddled in the judiciary and hindered the work of the Lebanese government institutions.”

He explained that Syrian forces first entered Lebanon to restore order in the country during the 1975-90 civil war.

The violations committed by Syria in Lebanon soon followed, he added.

“Ties between two neighboring countries should be based on respecting the independence, freedom, and sovereignty of each side,” stressed Saniora.

“The Lebanese-Syrian security system was comprised of a number of individuals and tools that enjoyed close ties with the Syrian security apparatus,” he continued.

“Security agencies are essential for any country,” he added, but the Lebanese-Syrian system abused its power and “hindered the path of justice by failing to tackle past assassinations in Lebanon,” he remarked.

It also tampered with the Hariri crime scene, which was confirmed by various investigation teams, noted head of the Mustaqbal bloc.

It even went so far as to fabricate accusations against individuals in order to imprison them, which it did, he explained.

“Later, the judiciary ordered their release because they were innocent all along,” Saniora said, while adding that there are dozens of examples of the violations committed by the security system at the time.

Furthermore, the Defense touched on the issue of the United Nations Security Council Resolution 1559 and whether Hariri played a role in it.

Saniora declared: “Neither Hariri nor his team were part of devising the resolution.”

Issued in September 2004, resolution 1559 calls upon all foreign forces to withdraw from Lebanon and for the disbanding and disarmament of all Lebanese and non-Lebanese militias.

The Defense then questioned Saniora about the four generals who were arrested between 2005 and 2009 over an alleged role in Hariri's assassination.

The MP said that he had first met Ali al-Hajj when he was the head of Hariri's guards.

“I used to meet him in passing and we barely spoke to each other,” he remarked.

Hajj was eventually promoted to head of the Internal Security Forces, in a move Saniora said was supported by the Syrian security system.

Asked whether Hajj was responsible for protecting the Hariri crime scene, Saniora replied: “I don't know who was responsible, but ideally the head of the ISF should have been in charge. I don't know if he can be blamed for tampering with the scene.”

The Mustaqbal bloc chief said that he knew of Army Intelligence head Raymond Azar, but enjoyed no ties with him.

Asked about former head of the presidential guard, Mustafa Hamadan, Saniora responded: “I was aware that he was close to former President Emile Lahoud, who appointed him as head of the guard soon after his election in 1998.”

Former General Security chief Jamil al-Sayyed, Hajj, Azar, and Hamdan were detained from 2005 until 2009 for their suspected connection to the Hariri assassination.

They were released over lack of evidence.

The Defense also asked Saniora about Syrian Intelligence chief in Lebanon Rustom Ghazaleh and his role in Lebanon.

The MP said that he “used to see Ghazaleh by coincidence” when he used to visit Hariri's residence.

“We did not have any sort of relationship,” he added.

Asked if Ghazaleh had any respect towards Lebanon, Saniora replied: “I cannot speak of any person's internal thoughts, but he did not act in Lebanon's interests.”

He remarked however: “I lean towards the belief that Ghazaleh did not have personal hostilities towards the people he dealt with. I believe he acted the way he did based on orders he received.”

“I do not know the details of Ghazaleh's work. I only know the results of his work,” he said.

“As far as I know, during February 2005, Ghazaleh was the most prominent face of Syrian intelligence in Lebanon,” he noted.

“It appeared that some information used to be hidden from the Lebanese prime minister. Information could be relayed to the president without informing the premier,” he revealed.

The STL Defense will resume its cross-examination of Saniora on Thursday.

Five Hizbullah members have been charged with plotting Hariri's February 14, 2005 assassination in a massive explosion at the Beirut seafront, but have not been arrested. Their trial in absentia began in January 2014 and is ongoing.

He certainly does NOT speak for me, but unfortunately he does for 98% of shiaa in Lebanon. It is very difficult to draw a line between shiaa and hezbollah these days.

Syrian hegemony is now replaced by iranian hezbollah hegemony over every aspect of Lebanese political, military, and social life.

Winston, Janoubi, Maxx and all others who place Lebanon over their Sect have my absolute respect and salutation.
I realize how difficult it is for a Shiite to be against the HA pressure, this only reflects their strength of character, freedom of thinking and patriotism.

"he cried because Israel failed to achieve its goal"
and did he have to cry in public to show us his feelings you think? Amazing analysis and accusations.

Southern - you are such a liar!!!! He cried for Lebanon and for the hundreds of innocent Lebanese victims including hundreds of women and children. I cried too. May be your heart is made of stone and head full of propaganda. Not everyone is.

I watched it southerm
1) he does not care about the politics of HA because he does not live in Lebanon. *** The rest of us live in Lebanon and we care about the Politics of HA which is loyalty to Khameini.
2) Everyone has the right to fdefend their country from foreign invaders . ****** Yes absolutely, but the problem is that HA does not cconsider Syria and Iran as foreign.
3) The resistance in Europe gets the honor of fighting the Nazis. True, but the resistance in Europe gave way to the creation and strengthening of the State and gave up their arms in favor of the NAtionnal armies. ***** HA on the other hand liberated the land from Israel to serve Iran and Syria, not to strengthen the Lebanese Governemnt. HA will never give up its arms peacefully until and unless told to do so by its protege' Iran.
I could go on and on, but I think you get the idea.

Southern my friend ...did you re read what you wrote...really..the guy had tears in his eyes bcz israel didnt finish a common mission with KSA to eliminate Hez?? do you recall how the conflict began ? your scenario doesnt seem plausible ....

he reversed the voting this time lol.

Well dearest Mystic, if Sanioura lies, even in a 50 years period, it wouldn't amount to a drop in comparison to the lies of some well known HA cadres, top cadres too. Maybe some honesty from you would help further this conversation too.

@senile, is that another kangaroo you're using again?

50shadesof.....
typical hezbollah supporter and mentality. Nothing new here, another supporter who has nothing to say but shower every respectable poster with disgusting language.

10 minutes ago MTV: Hizbullah gunmen appeared on the streets from Qmatiyeh to Souk El Gharb during the funeral of a party fighter who was killed in Syria.

I guess he surprised Hizballah by not openly accusing them. This is an important step as he also left it to the court to decided who is and who is not guilty. To Hizballah worshipers this is an anomaly since they are not used justice and law and hence the best they can revert with is the normal brainwashed response of Siniora is an Israeli spy or sympethiser. This is their level of thinking and its no wonder the majority of Lebanese have not accepted them as a realistic political party.

Southern, whether Sanioura cried or not is of no relevance, what is of relevance however is the fact that had it not been for his untiring efforts, Israel would have been in Beirut within a few days after when they decided to take the July 2006 war seriously, and all this BS about divine victory and Hezbollah would have been skewed barbecue a long time ago. Personally I don't have much affinity for Sanioura either, but at least you guys at HA and co, do have the decency not to distort facts, Hezbollah then was literally kneeling, hence Sayed Hassan's words now cast in solid Platinum, "Had I known...".