Tribute to Vanishing World of Analogue Film at Tate Modern 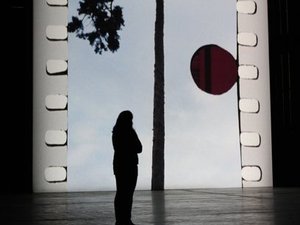 A homage to the disappearing format of analogue film by the British artist Tacita Dean is the latest exhibition to fill the cavernous space at the Tate Modern in London.

Plunged into darkness, visitors to the former power station see a huge screen resembling a piece of film, placed vertically, up which scrolls a constantly changing series of images, such as the sun, a snail or a factory chimney.

Dean is the 12th artist to fill the Turbine Hall and the first since Chinese artist Ai Weiwei's 'field' of sunflower seeds. The shows have so far attracted 26 million people, according to the museum.

The Berlin-based artist said her show was a love letter to the type of film -- mainly 16 millimeter and 35 millimeter -- that she has used throughout her career, but which is being chased out of existence by digital formats.

"We have created this beautiful media we are now losing," Dean said, adding that "16 millimeter print is the most in danger".

The director of the Tate Modern, Chris Dercon, said analogue film was in danger of becoming a "disappearing act" in the 21st century.

"Films will only be seen in museums," he said.

Writing in the show's catalogue, he says: "Today its years are numbered, but I will remain loyal to this analogue art form until the last lab closes."

The exhibition, "Film", is on show until March 11.