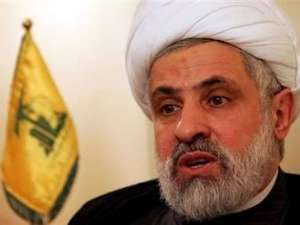 Hizbullah on Sunday lashed out anew at “those who don't want dialogue” between the party and al-Mustaqbal movement, blasting them as “instigators and rabble-rousers," as it called for speeding up efforts aimed at securing the election of a new president.

“We know that dialogue can only succeed if both parties want it and this is the case now. Some voices have rejected dialogue and they have become well-known,” Hizbullah deputy chief Sheikh Naim Qassem said.

Qassem's remarks are an apparent jab at head of al-Mustaqbal bloc MP Fouad Saniora, who on Tuesday told the Special Tribunal for Lebanon that slain ex-PM Rafik Hariri had told him that “several assassination attempts by Hizbullah” against him had been discovered.

But despite the recent war of words between Hizbullah and Mustaqbal over the STL and the Yemeni conflict, the leaders of the two parties, Sayyed Hassan Nasrallah and ex-PM Saad Hariri, have both expressed determination to carry on with the dialogue.

“The instigators and rabble-rousers in Lebanon, whose names are well-known, are only spreading poison,” Qassem added.

“Keep boiling up with anger, we will continue with dialogue even if you don't like it, we will carry on with any act that leads to stability, and we won't let you sabotage this stability in Lebanon,” Hizbullah number two said.

Commenting on the presidential vacuum that has been running since May 25, 2014, Qassem noted that holding the election is “a critical and very important issue for Lebanon.”

In an apparent reference to Hizbullah's ally and presidential candidate MP Michel Aoun, Qassem added: “Our choice is reasonable, popular and patriotic and it is totally compatible with all the rules of proper representation.”

“We urge them to return to their conscience and to put the national interest before the interests of some regional countries so that we can speed up the election of a president,” the top Hizbullah official added.

Turning to the Yemeni crisis, Qassem called for allowing the Yemeni people to make its own “political choices, internal talks and political solutions.”

He also slammed the Saudi-led airstrikes against Yemen's Huthi rebels as a “real aggression.”

It must be KSA that is sabotaging the presidential elections by ordering the FPM and the terror MPs not to head to parliament and cast their votes.

It seems that our Hizbos are expanded beyond their limits to hear from Qassim his empty and Taqiyah pleas for dialogue while their kids are engaged with Syrian regime to say the least.

“Keep boiling up with anger, we will continue with dialogue even if you don't like it, we will carry on with any act that leads to stability, and we won't let you sabotage this stability in Lebanon,” Hizbullah number two said......
They preach dialogue while haters want war. They preach Presidential elections while the other side boycotts all Sessions to elect a President.

"we will carry on with any act that leads to stability"

Here are examples of their acts:

Invaded Beirut and murdered 100 Lebanese on May 7