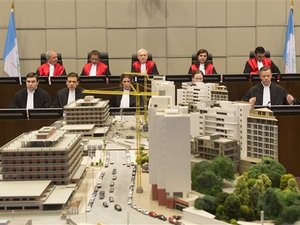 The Trial Chamber of the Special Tribunal for Lebanon has given the Lebanese government a deadline to meet the demands of the defense team, al-Akhbar newspaper reported on Tuesday.

If the Lebanese authorities do not cooperate with the defense during the coming 21 days, then the Trial Chamber could refer the issue to the STL President, Judge Ivana Hrdličková, said the daily.

The lack of cooperation could also be the subject of discussion at the U.N. Security Council, which might take several measures, including economic sanctions, against the Lebanese government in accordance with Chapter 7 of the U.N. Charter, the report added.

Founded under the Charter's Chapter 7, the STL is the first international court with jurisdiction to try an act of terrorism.

On several occasions, defense lawyers accused the Lebanese government of not providing them with the material sought.

The attorneys claimed they have not received any information to help their case.

Five Hizbullah members have been charged with plotting ex-PM Rafik Hariri's Feb. 14, 2005 assassination in a massive explosion at the Beirut seafront but have not been arrested. Their trial in absentia began in January 2014 and is ongoing.

I thought the defense would be pursuing the Lebanese government to produce the killers/murderers so they could "defend" them.

And the STL joke continues...

old news, we already knew that the STL went straight to israel to get all the "answers"
that's when they probably briefed them about the telecom data that they had planted in alfa and mtc servers.