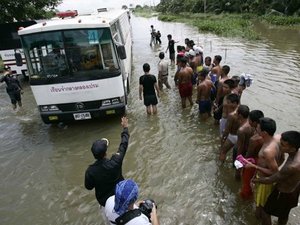 The U.N. cultural organization UNESCO said Thursday it would launch a mission to the ancient Thai city of Ayutthaya to assess the damage to the World Heritage site from the worst floods in decades.

It said the visit to the country's former capital would be arranged shortly by the Thai government, which is also preparing to apply for emergency assistance from the World Heritage Fund.

World Heritage property in Ayutthaya, a popular tourist destination about 80 kilometers (50 miles) upriver of Bangkok, has been flooded for more than a week, UNESCO said.

Culture minister Sukumol Kunplome said it was unclear how much damage there was because the city was still under water.

"Once the water subsides, we can estimate our loss," she told Agence France Presse.

Unusually heavy monsoon rains have killed at least 283 people, destroyed crops, inundated hundreds of factories and damaged the homes or livelihoods of millions of people in Thailand, according to the government.

Currently 26 out of 77 provinces are affected, while Bangkok is bracing for a large amount of run-off water to reach the city along with seasonal high tides that will make it harder for the flood waters to flow out to sea.

The authorities are building extra flood prevention walls and preparing to dredge and drain canals in the capital.

"We will dig deep and expand canals so the water can flow easily," said Prime Minister Yingluck Shinawatra. "I will assign military to take responsibility for it."

She said that while flood protection walls had been erected for inner Bangkok, more defenses were needed along the Chao Phraya River north of the city.

"People living outside the flood defenses will have to face water but not at a high level," Yingluck said.

Japanese automakers such as Toyota have suspended production in the kingdom due to flood damage to facilities or disruptions to parts supplies.

Flooding has also hit other countries in Southeast Asia, including Cambodia, where more than 200 people have died. In Vietnam, the toll has risen to 43 and officials say most of the dead are children.