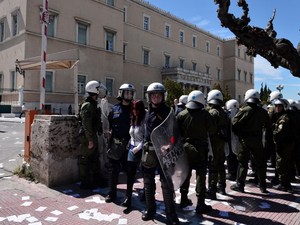 More than a dozen Greek anarchists were arrested on Wednesday after a protest at the gates of parliament in favor of jailed far-left extremists on hunger strike.

Taking the police by surprise, the anarchists unfurled a banner in front of a parliament entrance reserved for ministers and lawmakers for a few minutes before being escorted away.

The banner read "Solidarity to hunger strikers and satisfaction of their claims."

Around two dozen members of the far-left groups November 17 and Conspiracy of Fire Nuclei have been on hunger strike for several days to protest against plans by the previous conservative government to create new high-security prisons.

The radical government that came to power in January has already announced that these plans will be scrapped.

The parliament protest was strongly criticized by the conservatives who said the government was excessively lenient towards anarchists.

In recent weeks, anarchists have occupied several public buildings and universities in Athens and Thessaloniki to demand improved prison conditions.

The police has so far taken no action to clear the buildings.