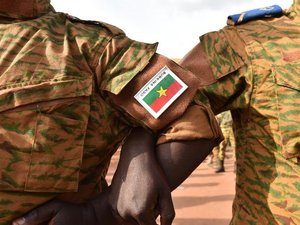 Burkina Faso authorities plan to cross into Mali and Niger to hunt the kidnappers of a Romanian mineworker seized in the far north of the west African nation, a minister said on Sunday.

The security officer was taken on Saturday when five armed men attacked the manganese mine in Tambao, 350 kilometers (220 miles) northeast of the capital, Ouagadougou.

The unidentified gunmen took off in the direction of the nearby border with Mali, according to security officials in both countries.

"Search operations are continuing. We are talking to our neighbors Mali and Niger to obtain rights to their territory in order to get our hands on the kidnappers," the Burkinabe minister told AFP on condition of anonymity.

"This is an area which borders the two countries, so the sweep will roll out in both directions," said a high-ranking Burkinabe army officer.

Burkina Faso's Regiment of Presidential Security, an elite secret service specializing in counter-terrorism, has been sent to Tambao to strengthen an army detachment that arrived on Saturday, he told AFP.

Kidnappings of foreigners, often for ransom, occasionally occur in Mali and Niger but not usually in Burkina Faso, a landlocked Sahel country.

There was no immediate indication of who was behind the attack.

An official in Mali's defense ministry said a "right of hot pursuit" was recognized by Bamako and many of its neighbors, including Burkina Faso.

The arrangement enshrines in law the right of police and security forces, in specific agreed circumstances, to pursue criminals into neighboring territories when normally they would be trespassing.

"So if it is necessary, Burkina Faso and Niger may exercise that right," the official said.

Romania does not have an embassy in Ouagadougou, but its foreign ministry confirmed the kidnapping, saying in a statement the hostage "was not wounded in the shooting."

The army and the government have set up separate crisis centers in a bid to track down the hostage, another army officer said.

Residents told AFP security forces had begun "intensive searches" of vehicles in towns across the north.

The mine is located some 350 kilometers from Mali's main northern city of Gao, where a Red Cross worker was killed in a jihadist attack on Monday last week and the site of a deadly rocket attack on Sunday.

Mali's vast desert north is riven by ethnic rivalries and an Islamist insurgency.

The country is also struggling with Tuareg militants fighting the army over northern territory they claim as their homeland.