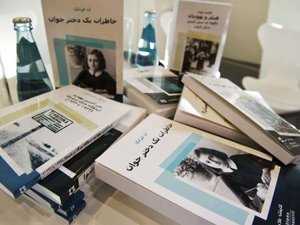 A group which has translated nine books about the Holocaust both into Arabic and Farsi for the first time appealed Thursday for publishers, saying "young people are yearning for this".

Launched in 2009, the Aladdin Project has already translated "The Diary of Anne Frank" and Primo Levi's "If This Is a Man", among others, which can now be downloaded for free from their website.

Project president Anne-Marie Revcolevschi, who moderated a roundtable on knowledge of the Holocaust at the Frankfurt Book Fair, said reaction to the translations had been good but they still had no publishers.

"Our aim is to find editors in Persian and Arabic. We need books, paper books, we need those books to be distributed in those countries," she said.

The revolutions in North Africa and the Middle East "show us that the populations of those Arab lands, they want dignity, they want respect, they want knowledge, they want truth", she said.

French filmmaker Claude Lanzmann, director of the Holocaust documentary "Shoah", said he was "very moved" to see the translation of his book, calling the organizers of the project "pioneers".

His film, subtitled as part of the Aladdin project, was recently shown by satellite TV in Iran, where hardline President Mahmoud Ahmadinejad has frequently and publicly denied the Holocaust, calling it a "myth".

Nazi hunter Serge Klarsfeld said it was a question of tackling ignorance.

"Rationally I cannot accuse the Arabic or Muslim people of not knowing what happened to Jews if they have no books, if they have no movies, so they are not educated in that field," he told the roundtable.