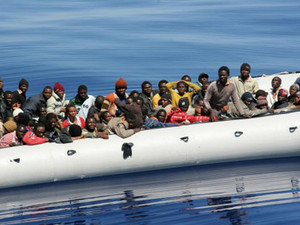 The EU's top immigration official on Tuesday said the bloc was "concerned" by its existing asylum regulations and was looking at ways to amend them with large numbers of migrants fleeing conflict crossing the Mediterranean.

"I know the Greek government is concerned by (the regulations) -- the European Commission is also concerned," European migration commissioner Dimitris Avramopoulos said during a visit to Athens.

"There is a collective conscience that something must now change," the commissioner, who is also Greek, said after talks with Greek Prime Minister Alexis Tsipras.

As one of the key ports of entry into Europe for thousands of migrants every year, Greece has long called for a revision of the "Dublin Regulation", under which the first EU country that migrants enter is obliged to take care of their asylum applications.

"Greece has become a repository for human souls," Tsipras said.

"This is not a Greek problem, it is a European problem. These are all victims of an untenable dream for thousands of people from war zones."

The Greek prime minister added that the EU should look "with great attention" at the "redistribution of asylum claimants and economic refugees inside the EU."

The ruling radical left Syriza party that came to power in January has made overhauling the country's immigration strategy one of its priorities, starting by shutting down migrant detention centres opened by the previous conservative government.

Overcrowding at the centres and complaints of police abuse led to numerous hunger strikes by inmates and one apparent suicide in February.

Athens has in recent years also demanded more money from the European Union to handle the influx of asylum seekers from war-torn countries such as Syria and Afghanistan.