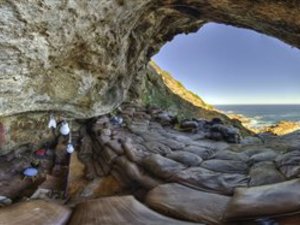 Researchers in South Africa have discovered what may have been the world's earliest artist's studio.

A 100,000-year-old workshop used to mix and store the reddish pigment ochre has been discovered in Blombos Cave on the rugged southern coast near Cape Town. At the same site, scientists have found some of the earliest sharp stone tools, as well as evidence of fishing.

The latest find is reported in Friday's edition of the journal Science. It includes pieces of ochre, grinding bowls, shells for storage and bone and charcoal to mix with the pigment.

Lead researcher Christopher Henshilwood of the University of Bergen, Norway, said the find represents an important benchmark in the evolution of complex human mental processes.

The ochre could have been used for painting, decoration and skin protection, according to the researchers.

The discovery shows that even at that time "humans had the conceptual ability to source, combine and store substances that were then possibly used to enhance their social practices."

Two separate tool kits for working ochre were found at the site, the researchers said.

Henshilwood, who is also affiliated with the South Africa's University of Witwatersrand, said in a statement that researchers believe that pieces of ochre were rubbed on rock to make a fine red powder, and that was mixed with crushed bone, charcoal, stone chips and a liquid. The mixture was put into abalone shells and stirred with a bone.