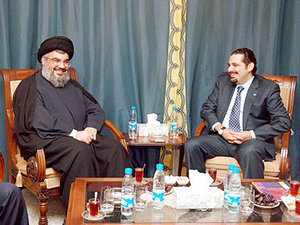 According to the pan-Arab newspaper al-Hayat published on Saturday, Khalil briefed Berri on the telephone conversation with Hariri as the speaker was contacting Hizbullah's leadership to tackle the tension between the two parties.

Sources said that Berri's statement on Friday was to deny media reports saying that al-Mustaqbal movement is mulling to suspend talks over the recent verbal spat with Hizbullah officials.

The speaker stressed on Friday Friday that dialogue between the rival two parties will continue, pointing out that the upcoming session will remain on time.

Sources told the newspaper that Berri is seeking to defuse tension between the two parties after they were engaged in a war of words over the Saudi role in Yemen.

Officials from the two sides have been meeting in Ain el-Tineh under the auspices of Berri since December to defuse sectarian hostility linked to the war in Syria.

The upcoming session is set to be held on April 14.

Hariri on Wednesday had slammed Iran's expansionist plans in the region, defended Saudi Arabia, and attempts to link Lebanon to the neighboring conflicts, in direct response to a speech by Hizbullah chief Sayyed Hassan Nasrallah.

However, Hariri's statements prompted Hizbullah's Loyalty to the Resistance bloc chief MP Mohmmed Raad to condemn the remarks against the criticism directed to Saudi Arabia, saying that linking Iran to the developments in Yemen and Lebanon are a “major mistake.”

“Only ignorants and cowards remain silent over Saudi Arabia's genocide in Yemen,” he stressed.

sure, continue your dialogue with the terrorist perhaps you can have 2 more of his pictures removed. That's all you are going to get Hariri. Step down for heavens sake and let someone else take the leadership of the anti-hezbollah movement. You failed and failed miserably and allowed the terror party to control Lebanon.

I wish HA would love Lebanon and work for the interest of Lebanon as much as 1/100th of Mustakbal.

you must be a Salafi Wahabi Christian (like me):)

Southern, I am with you on this one, nothing literally replaces dialog, but honest dialog based on mutual trust and respect. However, who these days can trust Hezbollah, even Sayed Hassan does not keep his words. Today he says one thing, the next day the very opposite. Like @Humble rightly said, Dialog with a gun on our head is not dialog but arm-twisting and sheer intimidation. Unfortunately Hezbollah is not Lebanese anymore (I am being again very mild here), Hezbollah has other stuff on its mind than Lebanon, this Wilayet El Faqih is still very active on its mind despite HA's repeated denials to the contrary. Well, HA and Iran are now engaged in wars they don't seem to have any clue as to how to wiggle out of. sadly for HA, you remind me of duck hunters, just use the duck crackle, soon enough ducks will fly over and boom, down a few more ducks. Iran has done the same to you these days.

I simply don't understand much of this dialogue right now, they want to talk with the Resistance, while throwing accusations, that is not real honest talk.

Mystic, you more than all of us here ought to understand what is going on. The M14 side is truly desirous an sincere in maintaining the dialog, haven't they proved that amply yet? But indeed, what's the use of it all when the moderates are stifled, what do you get thereafter but the radicals. It's a lot like in banana republics masalan in Africa, a military dictator takes over only to stay there forever, what do you get then because of that but one coup d'etat after one coup d'etat and from bad to worse and from worse to worst? HA must act wisely, and now.

Dialogue with a gun on your head.

I wish these guys would hurry up and reach an agreement to be honest I don't care who runs the country as long as they govern for all lebanon who cares what your religion or sect is aren't we lebanese and if you aren't lebanese please leave.