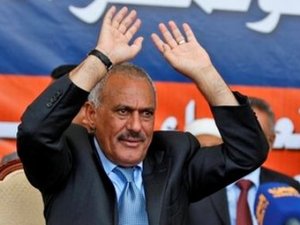 Demonstrators on Friday called for the United Nations to intervene to put Yemeni President Ali Abdullah Saleh on trial in the wake of a crackdown on anti-regime protests that has cost hundreds of lives.

"We want the world to pass a resolution which defends the blood of the revolutionaries," protesters chanted at a huge gathering near "Change Square" in central Sanaa that has become the epicenter of a campaign to oust Saleh.

The demonstrators, who protest organizers said numbered in the hundreds of thousands, called for the veteran leader to go on trial.

"There will be no immunity... Saleh and his cronies must face trial," chanted the protesters, gathered after weekly Muslim prayers as on every Friday since the outbreak of their campaign in late January.

Troops of dissident General Ali Mohsen al-Ahmar, who switched sides in March, were out in force to protect the demonstrators.

At a rival protest, tens of thousands of pro-regime demonstrators gathered near the presidential palace in southern Sanaa swearing to stand by Saleh who has been in power for the past three decades.

"The people want Ali Abdullah Saleh... With our souls, with our blood, we will sacrifice ourselves for you, Saleh," they chanted, in images broadcast by state television.

Protesters demanding the ouster of Saleh are hoping to see decisive action by the U.N. Security Council.

According to a letter from Yemen's youth movement to the United Nations earlier this month, at least 861 people have been killed and 25,000 wounded since mass protests erupted across the country.

The government, for its part, has urged the Security Council to avoid a resolution targeting the embattled president, calling on it instead to back a political solution.

Organizers of the youth protests have called for a march on Saturday from Change Square to al-Zubeiri Street which marks the demarcation line between the rival camps.

In south Yemen, which on Friday marked the 48th anniversary of independence before its unification with the north in May 1990, activists at rallies in several towns called for the restoration of the region's independence.