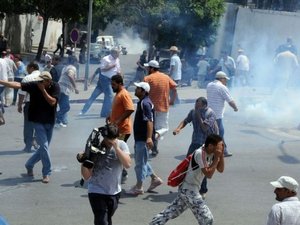 Police fired tear gas Friday at hundreds of people demonstrating against a private television station accused of blasphemy for airing a film with an image of God.

The demonstrators, mainly conservative Muslim Salafists, protested against Nessma television for the second time in a week after it broadcast "Persepolis", a globally-acclaimed animated film on Iran's 1979 revolution.

Police pursued several demonstrators who had taken refuge in a local mosque in Tunis's Kasbah district, an AFP journalist witnessed.

The demonstration had begun peacefully at a central Tunis mosque after Friday prayers, with men and women chanting against Nessma. Traders shut up shop as the group approached government offices.

Nessma head Nebil Karoui apologized on Tuesday for broadcasting the film, but most mosque preachers Friday devoted their sermons to the issue.

The offending scene of the animated film concerns an old, bearded image of God, of whom all depictions are forbidden by Islam.

Is this the "Arabian Spring" ? implementing the Sharia laws in a country used to be secular with the live and let live way of life. with beaches full of tourists.
Is this the faith of Egyptians too? no wonder that Assad won't give up as he knows what will become of Syria after he is gone.