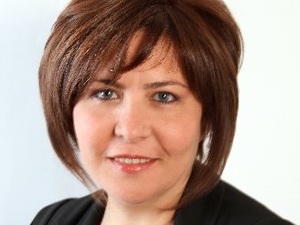 The U.N.-backed Special Tribunal for Lebanon announced Monday that it has appointed Lebanese national Wajed Ramadan as its new spokesperson, succeeding the Egyptian Canadian Marten Youssef.

“Ramadan joined the tribunal in September 2009 and established the STL’s Outreach Office in Lebanon,” the court said in statement.

In the following six years, she worked as an Outreach officer in the Beirut Office where she assisted in “creating and maintaining the Tribunal’s strong network of contacts in the country, particularly with the legal and academic communities as well as the civil society,” the STL added.

She organized and participated in numerous conferences, meetings, workshops and other events organized by the STL and its partners in Lebanon.

From 1998 to 2009, Ramadan was the editor-in-chief, producer, reporter and anchor of the French News Bulletin, which she launched at Future TV.

During the 2006 war in Lebanon, Ramadan was also the war correspondent for Radio Maroc, while in 2008 and 2009 she was the Beirut correspondent for France 24 International where she also featured in political shows.

She also holds a Bachelor of Science and a Master degree in Business Management, specialized in Finance and Banking, from the Saint Joseph University in Beirut.

Ramadan is a Lebanese citizen, who was born in Beirut and raised in the Ivory Coast, according to STL.

Marten Youssef announced in August 2014 that he was stepping down from his post for personal reasons.

He told the National News Agency back then that his resignation would not affect the functioning of the tribunal that is looking into the 2005 assassination of former Prime Minister Rafik Hariri.

“No resignation from the STL will affect its work and it will carry on at the same rate with or without me,” he added.

The Caporal has had an extreme nervous crisis...the medicine is already at the max. level!!!
It seems he seeing the presidency fading away...
This will lead him to more nervous breakdowns which can no longer be hidden.

Seems like the STL is more of a fashion show, than tribunal.

Her fashion does not fit into your Iranian culture. Chaddors are your type of fashion. Dark age mind sets.