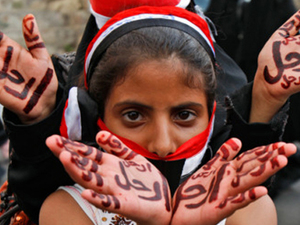 Publishers from Arab countries attending the world's biggest book fair have welcomed a greater freedom of speech ushered in by the fall of repressive regimes but still face challenges.

Thirteen Syrian exhibitors who had registered to attend the Frankfurt Book Fair were absent from the five-day event due to a visa problem, the fair's director of communications Katja Boehne said.

Other Arab editors hailed the lifting of printing restrictions in their countries following the "Arab Spring" of pro-democracy protests that shook off years of tyrannical, oppressive rule from Tunis to Tripoli.

In Tunisia, "one feels there is a bigger freedom of expression. You find all the books which were banned" under ousted President Ben Ali, said Walid Soliman, founder of publishers Walidoff.

"There is no longer official censorship."

Egypt is not only seeing new publishing freedom but a huge interest in books about the revolution, Ahmed Salah Zaki, director of the Cairo book fair said.

"Many people are eager now to read what happened in Tahrir (Square)," he said.

However, he added that he was not entirely supportive of a sudden total freedom of expression, preferring a "wisdom censorship" to guard against books critical of Egyptian customs and traditions.

Egyptian editor Sherif Bakr welcomed an end to corruption, which saw some big publishing houses receiving subsidies under the regime of ex-president Hosni Mubarak, he said.

"Today everyone has the same chance," Sherif Bakr added.

But while the political climate has eased, publishers still face practical problems.

The Arab publishing world, made up of 22 diverse countries with a population of 300 million people, faces low revenues and inefficient distribution networks, said Claudia Kaiser, the book fair's vice president.

"I have a price limit of four Euros a book, beyond which I cannot sell," Bakr complained.

"For deliveries, if we use services such as DHL, it works out too expensive, and if we take local services, it takes too long or gets lost," he added.

The development of electronic books could help overcome some of these problems, as well as contribute towards the movement of ideas between Arab countries.

With e-books, "all books will be available everywhere. And that will lower the prices by reducing production and distribution costs," said Bashar Chebaro, one of Lebanon's leading editors.