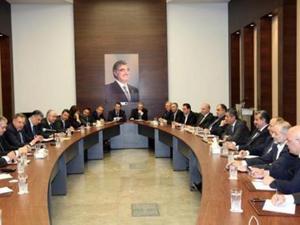 Al-Mustaqbal parliamentary bloc announced Tuesday that al-Mustaqbal movement's dialogue with Hizbullah will continue despite “lack of progress” on several topics, as it condemned the burial of a Huthi spiritual leader in Beirut's southern suburbs.

“The ongoing dialogue with Hizbullah represents a necessity amid these circumstances, despite the major discrepancy between the ambitions and the situation on the ground, and the fact this dialogue has reached a state of stalling and lack of progress on several issues,” said the bloc in a statement issued after its weekly meeting.

And as it highlighted the presence of “deep and big differences with Hizbullah,” Mustaqbal stressed the need to “exert efforts to lower tensions to pave the way for reaching a national agreement that secures the election of a new president.”

A war of words had erupted between the two parties in recent weeks against the backdrop of a Saudi-led military operation against Yemen's Shiite Huthi rebels.

In this regard, the bloc called on Hizbullah to “withdraw from Syria, Iraq and Yemen and from any foreign intervention” and to “reevaluate the experience of involvement in Iran's wars in the region and the defense of a tyrant regime that destroyed its country (Syria) and killed its people.”

Commenting on a U.N. Security Council resolution slapping an arms embargo on Yemen's Huthi rebels, Mustaqbal described the move as “a right step towards finding a solution to the crisis in Yemen.”

“It confirmed the legitimacy of the Arab decision to launch the uprising of dignity in the face of the Persian (Iranian) arrogance,” the bloc added, noting that the Saudi-led Firmness Storm operation “restored the strategic balance in the region.”

Separately, the bloc slammed Hizbullah for “bringing the body of (Huthi spiritual leader) Abdul Malik al-Shami to Beirut and burying him in it.”

Al-Shami was laid to rest on Monday near the grave of Hizbullah's military commander Imad Mughniyeh, who was killed in a 2008 car bomb blast in the Syrian capital Damascus.

Al-Shami died in the Iranian capital after he was transferred from Yemen to a hospital in Tehran to be treated for injuries he sustained in a bomb blast.

“How did that happen, which party took the decision and with whom did coordination occur? Why the insistence on entangling Lebanon in the region's conflicts?” Mustaqbal asked.

Mustaqbal are heroes of peace to accept to negotiate with the party of weapons and of war.

HA would not mention its weapons, and it is not even mentionning its thugs the resistance brigades, but yet, Mustakbal is biting the bullet for the sake of peace and negotiating with those bullies

I say Kudos mustakbal. You are true patriots.

Could you kindly tell us what agreements have you reached????

@ Lebanon_first & Humble
This is a meeting of the deaf because simply they will never reach a compromise. These are 2 different and ideologically opposed agendas
HA is following Iran's agenda while Hariri is following KSA agenda
There will never be an agreement

coolmec. True Hariri is following KSA agenda. But KSA's agenda is aligned with lebanon's interests while Iran's agenda is not
Furthermore, the very fact of talking is better than doing nothing. even if there is no agreement.