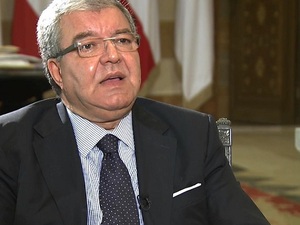 Hizbullah and al-Mustaqbal movement held their tenth dialogue session on Tuesday and discussed “the continuation of the security measures” in all regions, as the verbal escalation continued between the two parties over the Saudi-led operation in Yemen.

“The conferees tackled the continuation of the security measures in all regions in order to immunize the domestic situation, in addition to other issues that are of concern to the Lebanese,” the two parties said in a joint statement after the talks in Ain al-Tineh.

Mustaqbal and Hizbullah also discussed “some issues that are related to the refugee crisis,” the statement said.

Dialogue between the two rivals had kicked off on December 21 and was recently facing the threat of collapse due to a war of words over the Yemeni conflict.

A day after Saudi Arabia launched operation Firmness Storm on March 28, Hizbullah chief Sayyed Hassan Nasrallah appeared in a televised address and slammed the campaign as a “Saudi-American aggression.” He also promised Riyadh that it will suffer a “major defeat.”

Mustaqbal leader ex-PM Saad Hariri hit back at Nasarllah on the same night, denouncing his speech as a “storm of hatred.”

Hizbullah's al-Manar TV had said prior to the dialogue session that the conferees would stress the importance of “continuing dialogue and the security measures in order to prevent any negative repercussions on the country.”

Meanwhile, Interior Minister Nouhad al-Mashnouq, who is one of Mustaqbal's representatives in dialogue, launched a tirade against Iran's supreme leader Ayatollah Ali Khamenei shortly after the dialogue session.

“Those whose noses will be rubbed against the ground are the ones who have excelled in the culture of elimination and aggression,” said Mashnouq.

On Thursday, Khamenei accused Riyadh of “genocide” in Yemen, saying “the Saudis' noses will surely be rubbed against the ground.”

Rejecting any “insult” against Saudi Arabia, Mashnouq noted that Riyadh has always stood by Lebanon and the Arab countries.

“The Iranian 'illusion storm' will not win as long as there is a pulse in the Saudi heart,” the minister stressed.

Mashnouq himself a Wahabi stooge, will be one of the first to experience the full defeat of his Wahabi kingdom around the Middle East.

Not enough he supports genocide in Yemen, he also goes around insulting Irans Supreme leader, this is a time for outrage at the direct hits.
He forgot how it feels to have his nose and head against the floor, as in May 2008.

Mashnouq the corrupted pulse in the Saudi heart will be cut soon enough.

Mastica
we already told you what we think of you.

sure but you hezbis insulting the former lebanese president is no outrage ma hek? but insulting your supreme leader! waw!

we see where your loyalty lies, certainly not in Lebanon!

Mystic
You are a good project for martyrdom. Go fight along the filthy huthis. All the photos your propaganda machine has been circulating around the web of alleged genocide and massacres were fake photos and were of children massacred in Gaza and Syria. The whole world is laughing at you and your deceitful iranian ways. I hope the KSA keeps pounding you till kingdom come.

Mystic is a Safawi Zionist corrupted stooge. Since I typed it, it must be right.

Look at yourself and guess what you are.

Genocide? What would you cal what ASSad is doing in Yemen. Go ask the faqih and get back to us please. Stooges.

I meant Syria of course.

God bless you Nohad, KSA have been with lebanese institutions without discrimination. Help to rebuild what Nasroolaah and his gangs caused every time. There is no gratitude, only a great will to control and conquer.

There is no other loyalty than to al fakih