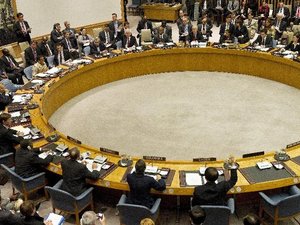 Supporters and opponents of U.N. action against Syria crossed swords at the Security Council Friday after it was revealed the regime's crackdown has cost more than 3,000 lives, diplomats said.

Russia and China last week vetoed a resolution which had raised the prospect of potential measures against Damascus.

"The advocates of inaction on Syria should draw conclusions from the latest appalling developments," French U.N. ambassador Gerard Araud told the closed meeting, according to diplomats.

His comments were a veiled attack on Russia and China, but also Lebanon, South Africa, Brazil and India which abstained in the Syria vote last week, diplomats said.

The Europeans raised comments made earlier by U.N. human rights chief Navi Pillay in Geneva that the toll from seven months of clashes in Syria had risen above 3,000. She said Syria risked "a full-blown civil war" unless the international community took action.

Russia and China have insisted the Security Council should not be moving toward sanctions.

China's envoy told Friday's meeting that Pillay's statement should not have been discussed at the Security Council, the diplomats said. Russia also objected to discussion on Syria.

France, Britain, Germany and Portugal, which proposed the resolution that was vetoed, have said they could propose a new text if events worsen in Syria.

Russia has distributed its own text which mainly calls for a negotiated settlement, but angered the European nations and the United States because it gave equal criticism to the opposition violence and the killings by Assad's security forces.

"The council did not live up to its responsibility to maintain international peace and security," he wrote.

"Instead this was a serious setback for all those in the Arab world who -- with their legitimate hopes and aspirations -- are fanning the wind of change."