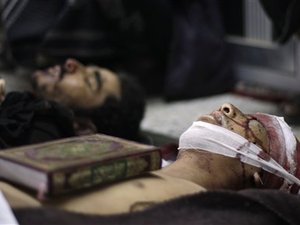 A U.S. airstrike has killed the media chief for al-Qaida's Yemeni branch along with six other militants, the Defense Ministry and security officials said Saturday, in the second high-profile American missile attack in as many weeks to target the terror group in the country.

A ministry statement on Saturday said Egyptian-born Ibrahim al-Bana and six other militants were killed in the southeastern province of Shabwa on Friday night. Security officials said an American drone carried out the airstrike, which was one of five overnight strikes that targeted suspected al-Qaida positions in Shabwa and the neighboring province of Abyan in Yemen's largely lawless south.

Friday's missile attack came two weeks after a U.S. drone strike killed prominent U.S.-born cleric Anwar al-Awlaqi, a gifted Muslim preacher and savvy Internet operator who became a powerful al-Qaida tool for recruiting in the West. Killed with him was Samir Khan, a Pakistani-American who was a propagandist for Yemen's al-Qaida branch, al-Qaida in the Arabian Peninsula.

A member of al-Awlaqi’s tribe said Anwar’s son Abderrahman al-Awlaqi was killed in the raid.

The tribal source told Agence France Presse that he had received confirmation from the militant-controlled Yemeni hospital where the dead and wounded from Friday evening's strikes were taken.

The latest airstrike underlines the growing use by the United States of drones to hit al-Qaida militants in Yemen in what appears to be a determined effort to remove the threat emanating from the group, blamed for plotting or inspiring a series of attacks on American soil and in neighboring Saudi Arabia, a staunch Washington ally.

Al-Qaida in the Arabian Peninsula has taken advantage of the political turmoil roiling Yemen. Embattled President Ali Abdullah Saleh has been struggling to stay in power in the face of eight months of massive street protests demanding his ouster and the defection to the opposition of key aides and military commanders.

Militants linked to AQAP have taken over several cities in the south, raising fears that they can establish a permanent stronghold in this strategically located nation. Yemen is in the southern tip of the Arabian Peninsula, on the doorstep of Saudi Arabia and the oil-producing nations of the Gulf. It also overlooks strategic sea routes leading to the Suez Canal.

In a separate development, the security officials said suspected al-Qaida militants have bombed a key, underground gas pipeline that extends from the Balhaf area in Shabwa to an export terminal on the Arabian Sea. The Friday night attack started a massive fire, with columns of flames lighting the night sky and seen from miles away.

Along with their individual destruction, the culture that produces these terrorists should be changed . Muslims alone have the capability of eliminating the teachings that lead these men to fanaticism.