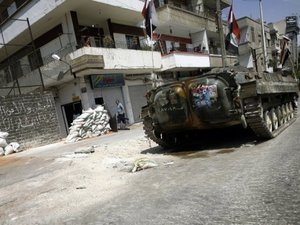 Syrian security forces on Saturday killed two people, one in the capital and the other in the flashpoint central city of Homs, activists said, as the protest movement against President Bashar Assad entered its eighth month with more gunfire and arrests.

"A young man was killed when security forces opened fire on a funeral procession for the child martyr Ibrahim al-Sheban," in Midan, a commercial neighborhood of Damascus, said the Local Coordination Committees (LCC).

The activist network said that more than 15,000 people, including women and children, came out to mourn the boy, who was one of 12 killed on Friday when security forces fired at anti-regime demonstrators in several towns and cities.

A young man was also killed on Saturday in the central city of Homs, a hotbed of dissent, where the Syrian army cordoned off several neighborhoods and where pro-activist groups reported heavy gunfire.

"The army opened fire on all the entrances of the al-Nazihin neighborhood in Homs, leading to the death of a young man who was heading to work," said the Syrian Observatory for Human Rights, quoting activists on the ground.

"The army erected new checkpoints in the neighborhoods of Bab al-Saibaa, cutting it off from other neighborhoods," the Observatory said.

In Idlib, a northwestern province near Turkey, Syrian troops pursued defectors in the course of a military operation to hunt down defectors, arresting 31 people, the Britain-based Observatory said.

"Since dawn, Syrian security forces have conducted a search and arrest campaign in and around the (Idlib village of) Kfar Nubul looking for an intelligence officer who deserted," the watchdog said.

The LCC meanwhile said gunfire was heard in several towns in Idlib, citing reports of defections in the area and a night demonstrations broken up by security forces.

And gunfire rocked "most of the neighborhoods" in the flashpoint southern city of Daraa, where the movement calling for greater freedoms and the fall of Assad's regime started in mid-March.

U.N. human rights Chief Navi Pillay said on Friday that more than 3,000 people, including 187 children, have been killed in the fierce crackdown on dissent.

But security forces are facing mounting armed resistance and defections, according to activist reports, with clashes between soldiers and defectors leaving 36 dead, including 25 soldiers on Thursday alone.

Heeding that warning, envoys for Germany, France, Britain and Portugal raised Assad's deadly assault on protesters during closed-door consultations at the U.N. Security Council on Friday.

Russia and China last week vetoed a resolution which had raised the prospect of potential measures against Damascus.

"The advocates of inaction on Syria should draw conclusions from the latest appalling developments," French U.N. ambassador Gerard Araud told the closed meeting, according to diplomats.

His comments were a veiled attack on Russia and China, but also South Africa, Brazil and India who abstained in the Syria vote last week, diplomats said.

Russia and China have insisted the Security Council should not be moving toward sanctions.

China's envoy told Friday's meeting that Pillay's statement should not have been discussed at the Security Council, the diplomats said. Russia also objected to discussion on Syria.

Russia has distributed its own draft resolution which mainly calls for a negotiated settlement, but angered the European nations and Washington because it gave equal criticism to the opposition violence and killings by security forces.

The six Arab states of the Gulf, meanwhile, have demanded an emergency meeting of Arab foreign ministers on Sunday to discuss the unrest in Syria, an Arab League official in Cairo said.

The 22-member League has not yet approved the request but such meetings need the approval of only two members to take place.

Revolt? The majority of the country is with Assad, so what's with a few Sunni crazies proving their stupidity once again? OK a few get killed, but in my opinion, all Sunni crazies must be pursued to the end of the earth and terminated. After all, isn't this what the US is and continues to do, and thankfully, of course? 3alehom

so funny ponteblue and so stupid it is not even worth answering such ignorance...