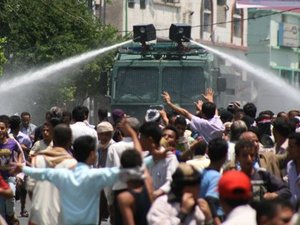 Security forces used live rounds as well as tear gas and water cannon to try to disperse hundreds of thousands of Saleh opponents trying to march on loyalist areas of the city center from their Change Square stronghold, witnesses said.

The death toll went up to at least 12 according to several medics as bodies were taken to four different hospitals.

Doctor Mohammed al-Qubati, the coordinator at a field hospital in the square, said two bodies were brought to the facility, and many others wounded, including at least 30 hit by gunfire, while 10 were in serious condition.

One of those killed with a bullet to the head was taken earlier to the same field hospital, along with 90 injured demonstrators, medics said, adding that the casualty toll was only preliminary.

A third body was later brought to the same makeshift facility.

The bodies of five more protesters were taken to the privately-run Science and Technology Hospital along with dozens of injured, at least 15 of whom had bullet wounds, medics there said.

The bodies of four other protesters were taken to two other hospitals, medics said.

The clashes erupted on al-Zubeiri Street which marks the dividing line between parts of the capital held by troops loyal to Saleh and those held by dissident units under the command of General Ali Mohsen al-Ahmar, who rallied to the opposition in March.

Activists had called on protesters to march on the front lines on Saturday in a bid to bring to a head 10 months of increasingly bloody demonstrations against Saleh's 33-year rule in Sanaa.

State television claimed that the "unauthorized" protest marched from Sitin Street to the area of Aser, which is under the control of Saleh loyalists, quoting alleged witnesses claiming that protesters opened fire at civilians.

The veteran president has refused to step down despite increasingly strident calls for his departure from both Western governments and impoverished Yemen's wealthy Arab neighbors in the Gulf.

Demonstrators have rallied in streets surrounding Change Square urging the U.N. Security Council to take decisive action against Saleh by imposing sanctions that would help force him out of power.

Protesters also called on the United Nations to put Saleh on trial.

"There will be no immunity... Saleh and his cronies must face trial," chanted the protesters, gathered after weekly Muslim prayers as on every Friday since the outbreak of their campaign in late January.

Meanwhile, ten gunmen from the Hashid tribe that has sided with protests against President Ali Abdullah Saleh were killed in clashes with tribes loyal to the embattled leader, a tribal source said.

The followers of the tribal leader Sheikh Sadeq al-Ahmar were killed in shelling that targeted their position in the Sufan residential neighborhood, near al-Hassaba area, the stronghold of the Ahmar clan, a source in the sheikh's office said.

The shelling hit an area where the home of Ahmar's brother Hemyar, who is the vice speaker of the parliament, is situated, the source said.

The office of the Yemeni-owned al-Saeedah satellite television, which broadcasts from abroad, was also hit in the shelling, according to the management of the channel.

Ahmar gunmen were engaged Saturday in fierce fighting with the partisans of Sheikh Saghir bin Aziz, a tribal leader who remained loyal to Saleh after months of nationwide protests demanding his ouster.

According to a letter from Yemen's youth movement sent to the United Nations earlier this month, at least 861 people have been killed and 25,000 wounded since mass protests erupted across the country.

The government, for its part, has urged the Security Council to avoid a resolution targeting the embattled president, calling on it instead to back a political solution.