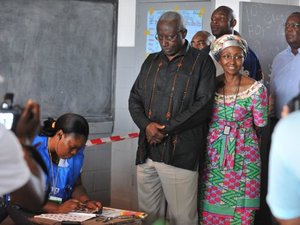 Opposition parties in Liberia on Saturday said they were pulling out of the elections, claiming fraud, as vote-counting put incumbent President Ellen Johnson Sirleaf in the lead.

"We are pulling out of the process because it is not democratic and there is a lot of fraud," an opposition source said in the wake of the October 11 elections which also included parliamentary and senatorial polls.

The parties concerned included the Congress for Democratic Change of Winston Tubman, lying second in the count, and the National Union for Democratic Progress of former warlord Prince Johnson, ranked third.

The opposition move follows a fire overnight in offices of Sireleaf's Unity Party in a Monrovia district. Police chief Al Karlay said it was not yet known if the blaze was deliberate.

With more than half of polling stations tallied, Sirleaf mustered 45.4 percent of the vote while former diplomat Tubman came in with 29.5 percent, elections chief James Fromayan said at a press conference late Friday.

With a run-off election looming, Johnson looked poised to become a surprise kingmaker, in third place with 11.4 percent.

The election, seen as key to cementing the country's fragile eight-year peace after two back-to-back civil wars, was lauded as peaceful by the United Nations and African observers.

Tubman had alleged ballot stuffing, but Fromayan said no official complaint had been filed.

Observers from the Carter Center urged parties not to make any statements concerning the results until the process was complete.

"We will pay close attention to the actions and statements of the political class, and in particular to the presidential candidates, including after the elections.

"Resorting to violence will not be tolerated," said a statement.

So, Mr. Moreno-Ocampo, we can all just relax! You are in charge! What a relief!