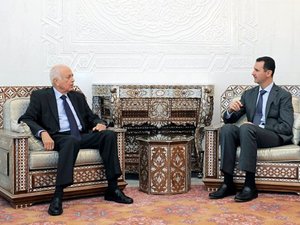 The agency cited the Arab League's deputy leader Ahmed Ben Helli as saying the meeting would be held at the request of the Gulf Cooperation Council.

The oil-rich Gulf States in the council had called for the emergency Arab meeting to address the mounting bloodshed in Syria as Damascus shows no let-up in its deadly crackdown on protests.

They called the meeting to discuss "the situation in Syria, which has deteriorated sharply, particularly in its humanitarian dimensions, and steps that could help end the bloodshed and halt the machine of violence," according to their statement on Thursday.

Arab foreign ministers already met in Cairo on September 13 and called on the Syrian authorities to "immediately stop the bloodshed," drawing a testy response from Damascus.

More than 3,000 civilians have been killed in Syria since mid-March, when nationwide protests erupted against Assad's regime, according to U.N. figures.