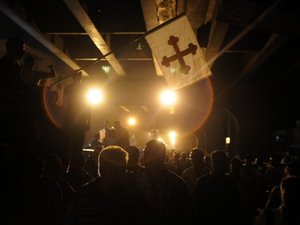 Egypt's ruling military approved Saturday a law to punish discrimination after clashes between soldiers and Christians killed 25 people in the country's worst violence since a revolt this year.

The amendment to the criminal code states a punishment of a fine no less than 30,000 pounds (5,000 dollars) for discrimination based on "gender, origin, language, religion or beliefs."

The punishment for a government employee convicted of discrimination is at least three months in prison or a minimum fine of 50,000 pounds, according to the text of the amendment published by the official MENA news agency.

The caretaker cabinet said Thursday it would discuss the sensitive issue of building permits for Christian churches at the heart of sectarian tensions in the overwhelmingly Muslim country.

The announcement came as nearly 3,000 mourners gathered in central Cairo for a candlelight vigil in honor of Coptic Christians among 25 people killed in weekend clashes during a demonstration over an attack on a church.

The military, in power since a popular uprising ousted President Hosni Mubarak in February, has denied Coptic witness accounts that its soldiers fired on the demonstrators and ordered an investigation.

Copts, who comprise roughly 10 percent of Egypt's 80 million population, say the laws on obtaining building or renovation permits for churches are overly restrictive, and that Muslims enjoy much a more liberal regime for mosques.