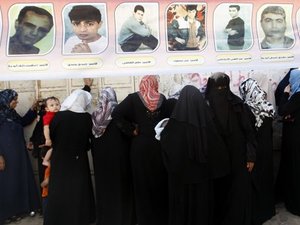 Palestinian groups are planning celebrations to mark the release of prisoners by Israel as part of a deal to secure the exchange of Gilad Shalit, a statement said on Saturday.

"All organizations have agreed to begin preparations for the reception of the prisoners, to receive them like heroes with official and popular celebrations," said the statement, read out at a news conference in Gaza by a spokesman for the Popular Resistance Committees.

"The organizations expressed their pride in this agreement that Hamas reached with Israel, with the mediation of Egypt, and applauded the heroes who kidnapped Gilad Shalit," it added.

"They said they would continue to make every effort to free every prisoner held in Israel jails."

Ismail Radwan, a Hamas official, for his part said that the "dossier of prisoners remains the priority."

Radwan said an official welcoming ceremony would be held at Rafah, the crossing point between the south of Gaza and Egypt "with the participation of Hamas and all organizations."

"The festivities will then continue in the Gaza Strip," he added.

The Hamas rulers of Gaza are to release Shalit, captured in a cross-border raid in 2006, in exchange for a first batch of 477 Palestinian prisoners and a second of 550 within two months.