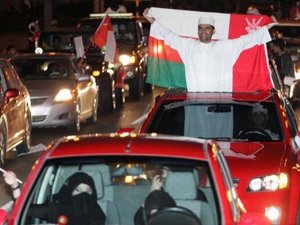 Omanis voted on Saturday to elect their purely consultative Majlis al-Shura council, which Sultan Qaboos has pledged to vest with new authorities in response to unprecedented social unrest.

Voting centers across the sultanate closed at 7:00 pm (15:00 GMT) after opening for 12 hours and drawing a "strong" turnout, according to an electoral commission official.

"There was a strong and significant turnout of voters in the morning, and it continued throughout the afternoon," Sheikh Ali bin Nasser al-Mahruqi told Agence France Presse. No figures were immediately available.

Some 518,000 eligible voters out of about two million Omanis were called to take part in the polls in which 1,133 candidates, including 77 women, competed for four-year terms in the 84-seat council.

Some voters lined up outside voting booths before they were opened, according to an AFP correspondent.

"I am quite surprised by the large turnout by voters from the early hours of the morning," said candidate Mariam Balhaf, a woman running for a seat in the southern province of Salalah.

The council, which was created in 1991, has the authority to question ministers and advise the government on socio-economic issues but has no legislative power or role in defense, internal security or foreign policy.

The sultanate also has an all-appointed Council of State, a 57-seat upper chamber which along with the Majlis makes up a Council of Oman.

The normally peaceful sultanate was caught up earlier this year in the protests sweeping the Arab world, with demonstrators taking to the streets in late February to demand improved living conditions.

In the northern city of Sohar, two demonstrators were shot dead in confrontations between police and protesters.

At the start of March, Sultan Qaboos announced a cabinet reshuffle and the creation of 50,000 jobs. Demonstrators insisted their protests were aimed at "corrupt" officials and not at Qaboos, who has ruled for 40 years.

Oman, a non-OPEC member, in 1994 became the first Arab state in the Gulf to give women the right to vote and stand for public office.

Elections are becoming more frequent in the Gulf, as Arab monarchies take tentative steps towards meeting demands for reform. But only Kuwait and Bahrain have elected parliaments.