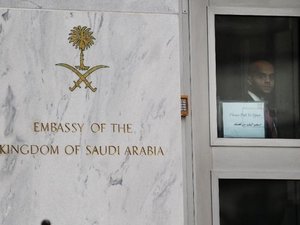 Saudi Arabia has asked U.N. chief Ban Ki-moon to inform the Security Council of the "heinous conspiracy" to kill its envoy to Washington, in an alleged Iranian plot, SPA state news agency said on Saturday.

"The Saudi permanent mission to the United Nations in New York has ...formally requested the U.N. secretary general to inform the Security Council of the heinous conspiracy to assassinate the Saudi ambassador," it said.

"All those involved in this odious attempt should face justice," it added, quoting a statement by the mission.

The United States on Wednesday sought U.N. Security Council support for action to hold Iran "accountable" for the alleged plot, with Britain and France already strongly on board, according to diplomats.

The U.S. Justice Department on Tuesday charged two men with conspiring with Iranian officials to assassinate the Saudi ambassador to the United States, Adel al-Jubeir.

Iran, which faces four rounds of Security Council sanctions over its nuclear program, called the U.S. allegations part of an "evil plot" against the Islamic Republic.

In a letter of protest to the Security Council, it accused Washington of "warmongering."

Tehran hardened its denials on Saturday, with the country's supreme leader Ayatollah Ali Khamenei dismissing the accusations as "meaningless and absurd".

Saudi Foreign Minister Prince Saud al-Faisal has said his country "will find a suitable response" against Iran for the alleged plot.

But Iran's Foreign Minister Ali Akbar Salehi said: "We hope the Saudis will deal with this issue with caution."

He accused the United States of trying to create divisions in the Middle East but said the Saudis were "too wise to get involved in this political game."

What is the UN gonna handle to handle? They have not yet got to punishing the criminals who waged an illegal war in Iraq that HAS KILLED hundreds of thousands. I repeat: HUNDREDS OF THOUSANDS. Then, there is the Saudi criminal involvement in Bahrain, and in funding and supporting the Sunni fanatics and crazies in Egypt, Tunisia and just about everywhere else. Good luck to the UN, which stands to Utter Nonsense.

Oh I get it, the zionist war department and mossad are trying to create division in Syria as well as they did in Lebanon for 30 yrs. I can't wait to see who paid the Mexican and the details of the story, as I am sure it's the same story as the STL and 4 stooges that are hiding under the rat's home.

Lets do the comparative math 101:

people and background categorized as: repressed, religious fanatics, no devotion or practice of human qualities whatsoever or rights, practice of medieval law as The Law sponsored by a "religious" book, sponsors of world's 80 percent of terrorists, non-existing cultural background or inventive spending whatsoever on non existing self productivity or any vague similar recollection of such kinds.

Politics: dirty player highly influencial dated "non democtratic" entity allied to most modern "democratic" western entity in a hypocracy of movement in the region and time.

Purpose: to exist for the sole purpose of existence on the world's richest grounds of resources while making maximum profit with maximum consumption and benefit with nothing in return to both the world or humanity itself.

conclusion: camel riders in the desert just so happened to stumble upon a treasure dove, existing to continue their good for nothing existence.

..... Yet, another plot by the american zionist machine to discredit the non glorious filthy resistance and its Persian Farsi Masters in Iran.

I can see 3 things that might be driving this:
- stop iran support to the syrian regime.
- stop iran dominance in Lebanon.
- stop iran fomenting troubles in the GCC.
failure to do so will definately result in war.

were's my post naharnet, I used no foul language, you have no right to take it out - its freedom of speech that you praise democratically, and point of views are what you get.

I think SA should play the game of Iran. It should let go of the assassination attempt by sleeping on it. I for one is very suspicious of the American's plays and attempts of derailing the Arab world in favor of Israel. I also believe that America is run by the Jewish lobby. That is why I think the Saudi’s whom I respect and love very much as I used to live and work there should act wisely. In general, the Saudis are very peaceful people and their king is very wise and respectable. But time is not right for us the Arab to give Israel a chance of splitting us as Arabs by letting us engage in wars with the Iranians. We should be wiser and more attentive for the Jewish ploys.

God bless Saudi Arabia and its king and its great people.

Whoever speaks badly about SA or its people is only being vindictive for no reasons other than being jealous of the kingdom's advancements.