Ministry Annex Set Alight as Clashes Break Out in Rome 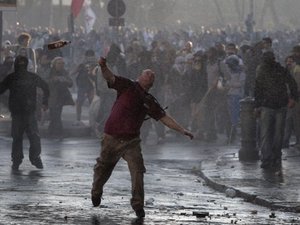 Seventy people were injured in violent clashes in Rome on Saturday that broke out at an anti-capitalist protest, with three in a serious condition, Italian news agency ANSA reported.

Twenty-five were treated at a field clinic near St John Lateran square where most of the clashes between protesters and police occurred. The 45 others were taken to other emergency wards in Rome, the report said.

Groups of violent protesters threw bottles and smoke bombs at police lines at a rally that had passed off mostly peacefully as part of a global day of protests inspired by the "Occupy Wall Street" and "Indignant" movements, while a group of activists set alight a defense ministry annex in Rome.

Flames could be seen coming out of the roof and windows of the building on Via Labicana as firefighters struggled to tame the blaze. Dozens of masked protesters could be seen in the area, which had not been cordoned off.

Some protesters smashed bank and shop windows and set cars alight, while others shouted "No to violence!" and tried to restrain them.

Police said three people were injured, including one man who was hit by a bottle as he tried to stop violent protesters.

"Only One Solution: Revolution!" read one placard at the protest. Another said: "We Are Not Assets in the Hands of Bankers!" One group carried a cardboard coffin with Italian Prime Minister Silvio Berlusconi's name on it.

"Today is only the beginning. We hope to move forward with a global movement. There are many of us and we want the same things," said one protester, Andrea Muraro, a 24-year-old engineering student from Padua.

Around him, protesters chanted: "We're not paying for the crisis!"

"I hope politicians realize that this many people and around the world don't agree with their way of managing our lives," said a student organizer, Jacopo.

Famous monuments including the Colosseum and the Roman Forum were closed down and four metro stations were shut as 1,500 police officers patrolled the streets, while two police helicopters could be seen circling above.

The total number of participants expected was estimated at between 100,000 and 200,000 people, Italian media reported, citing organizers.

Numbers were boosted after Italy's main trade unions and student movements gave their backing to the protest.

Protesters came from 80 provinces across Italy.

"Young people are right to be indignant," Italian central bank chief Mario Draghi, who is set to take over as head of the European Central Bank next month, said on the sidelines of a G20 meeting in Paris, Italian media reported.

"They're angry against the world of finance. I understand them," said the 64-year-old, a former vice chairman at Wall Street giant Goldman Sachs, adding however that "the demonstration should not degenerate."

As reports of the violence came through, he said: "It's a great shame."

Similar protests in the Italian capital in December 2010 degenerated into running street battles in the city center and left dozens injured. There have been fears of clashes ahead of Saturday's rally.

jabal min el habal is orgasmic at this development he's doing the ashura dance. Like these hooligans he nor his family ever paid any taxes they gets the cable and electricity illegally an still wants the government to take care of him and his 58 brothers and sisters. But he sure misses burning tires and getting his ka3keh

What is going on in Rome is not the logical progression from events in Cairo, but from events in Syria. The homocidal response of the Assad Regime to the demonstrators and the silence of the lambs response from the Western Industrialized World sends a message to the people living in the West. The message is that their leaderships are pulling for Assad the autocrat to win out against the demonstrators. The message is that if the people in the West rose up like the people of Syria have risen, they can expect the same from the holders of power, both political and economic.

The problem in Syria is a black hole of international law and and order pased on the rule of law. The inaction of the West will have consequences and those consequences are being seen in London, Rome, New York, Paris and everywhere else where free men and women are repulsed by the world's leaders looking the other way as Assad attempts to murder his way into continued power.

i wander is progressive and democratic youth of march 14. are they occupying beirut's banks?
since most of them are saudi banks, the answer if of course no.

We are still waiting to see if there will be tents and 24/7 strike in downtown beirut like before as soon as the green light from Iran masters is here.
This time it would be tents painted with the sentence: We did not try to assassinate the Saudi Embassador in the US please do not drop bombs on us or continue paying our salaries.