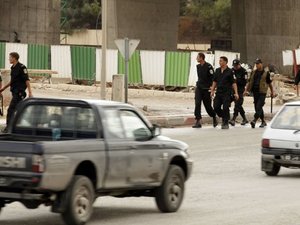 Tunisia's Islamist party Ennahda, tipped to dominate elections later this month, on Saturday condemned an attack on the home of a television chief over alleged blasphemy, denying any role in it.

But Ennahda party chief Rached Ghannouchi equally accused the Nessma television station of "provocation" for airing a film that depicts an image of God as an old, bearded man.

"I support the right of the Tunisian people to denounce this attack on their religion," Ghannouchi said from Paris, insisting that his party is against "all forms of violence."

Ali Larayedh, a member of Ennahda's executive, had earlier told Agence France Presse that the party had "nothing whatsoever to do with these acts of violence."

About 100 men firebombed the home of Nessma private television director Nabil Karoui late Friday in protest at the airing of a film that they say blasphemed Islam. He was not home and his family managed to escape.

Witnesses described the assailants, who were armed with Molotov cocktails, knives and swords, as members of the ultra-conservative Salafist sect.

Earlier, militants clashed with police in the streets of Tunis over the broadcast at a demonstration calling for the closure of the station.

The main demonstration began peacefully at a central Tunis mosque after Friday prayers, with men and women chanting slogans against Nessma. Thousands of people, many of them Salafists, took part.

The broadcast of "Persepolis" on October 7 sparked an escalating series of protests culminating in the attack on Karoui's home.

A small but vocal minority, the Salafists have grown in strength in recent weeks. They have been blamed for several incidents, including an attack on a movie theatre showing a film on secularism.

Activists in favour of a secular state have called a protest against the Salafists on Sunday.

The protests have increased fears of unrest barely a week ahead of historic polls to elect a constituent assembly on October 23, the first since January's overthrow of president Zine el Abidine Ben Ali.

"Persepolis", a globally acclaimed animated film on Iran's 1979 revolution, offended many Muslims because of the scene showing a representation of God. All depictions of God are forbidden by Islam.

Karoui apologized over the scene, but most mosque preachers devoted their Friday sermons to the issue. After the attack on his home, the station accused some imams of having incited the violence and charged that Ennahda, though nominally moderate, had tacitly encouraged it.

"We don't need to respond to those who have continually slandered us instead of judging us by our actions," Larayedh said. "We are loyal and determined to preserve the transition process. We are through with dictatorship, and we have other ways to make ourselves heard besides violence."

Larayedh said Ennahda had advised young supporters to avoid demonstrations "that could degenerate".

Party chief Ghannouchi, speaking to AFP by phone from Paris where he was visiting members of the expatriate community, predicted Ennahda would perform well at the upcoming polls.

"Ennahda is the largest party (in Tunisia) and its popularity is rising," he said.

The Tunisians should they decide to vote for an islamist Government would have replaced a secular Dictatorship with an even worse Religious one. Very critical times indeed for Tunsia, Egypt and the rest of the Arab Spring countries. Islamists will promise the people "heaven" but have and will always deliver hell instead (poverty, criminality, corruption, opression, isolation, .....just like the Failed Iranian Regime from Hell). These snakes can never be trusted. There's a much better way it's called a secular parliamentarian democracy where Tunisia and the other countries that implement it in all its details no matter how long it takes wil truly shine.