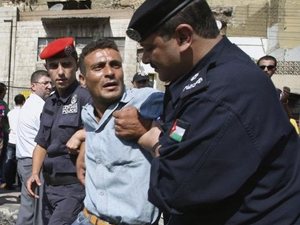 The conference, entitled "For reforms and against corruption," was being held at Salhub, 50 kilometers from Amman, and attended mainly by members of the Bani Sakher and Bani Hassan tribes, they said.

"The attackers suddenly began throwing stones at the participants and then fired in the air to disperse the gathering," one witness said.

"The tribal members then drew their weapons and also fired in the air, causing the attackers to flee," another participant said.

At least 35 people were slightly injured and 27 cars damaged, organizers of the meeting said.

Among those attending the conference were National Reform Front (NFR) head, former premier Ahmad Obeidat, and Zaki Bani Rsheid, chief of the political office of the Islamic Action Front (IAF).

Witnesses said the two men were "protected and evacuated by participants" when the violence began.

A rally by youths demanding political reforms held on Friday in the city of Irbid was similarly disrupted by unknown attackers, witnesses said.

Jordan has been the scene of protests since January to demand sweeping economic and political reform.

The NFR was formed in May by the Muslim Brotherhood, leftist parties, trade union leaders and independent figures.

Unknown attackers? Seriously? It was the "jordanian" shabeeha who did it, the same thugs that beat people up during protests. The "jordanian" security is always attacking the tribes because they are rival clans (just like the saudi al saud family was rival with the other saudi family that got the power in jordan ie the so called hashemites). The security often get attacked by tribe members who are rivals to the bribes in the mukheberet as a revenge, its like a un-noticed mini civil war taking place for years now, something that is not mentioned in western press because they think king abdallah is a modern leader simply because his mother is british when in reality he is a incompetent dictator whos main job is to pose for the camera while the mukheberet run things their way. The syrian baathists are even more merciful than the bedouin mukheberet in jordan. I wish Syrians, Lebanese and Palestinians would distance themselves from the barbaric khaleeji arabs who have harmed us all so much.