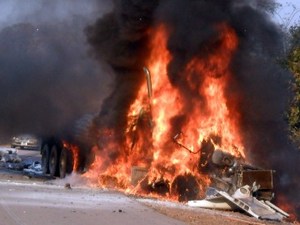 A truck carrying copper collided with a bus in Zambia on Saturday, killing 18 people, police said.

The accident took place north of Lusaka in Kapiri Mposhi, police spokeswoman Ndandula Siamana told Agence France Presse. The bus was on its way to the capital.

Five boys and five girls were among the victims, Siamana said, adding that 17 people were hospitalized in nearby towns.

Zambia is Africa's largest and the world's seventh-largest copper producer, and the metal accounts for 85 percent of exports.

The copper is transported by trucks and accidents are common, but rarely with so many casualties.